Green Advocate of the Year 2015 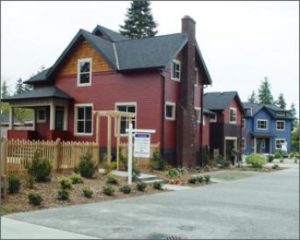 Martha designed her wall to be cost effective and feasible while creating superior energy efficiency. Since framing is usually the most expensive part of the project, Martha decided to take a page from the Seattle framers’ playbook and keep it simple. When she was a City of Seattle building inspector in the 1980s she noticed they were framing four story apartment buildings with a sheet of drywall placed over the studs and under the exterior plywood sheathing.  At the time this was required to deliver one-hour fire rated exterior walls. Since it was only a slight variation of the familiar fire-rated wall, why not substitute foam for drywall and carry on as usual?

This subtle shift required no new training for the framers and was familiar to the code officials who approved it prescriptively under both 2006 and 2009 Seattle Building Code, Chapter 14 Exterior Walls.  The foam weighs almost nothing, so Martha’s structural engineer had no problem with signing off on ½” of foam under the plywood. A longer nail would be necessary, but there were no structural changes to shear walls. In 2008 they increased to 1” foam board further improving the insulative effect.

Green Advocate of the Year 2015

Some Features that earn Martha’s homes a 5-star Built Green designation are:

Around 2008, Martha explains, “I met the Building America team who told me they were calling it the Martha Wall.  They monitored the home I lived in at Queen Cty Ecovillage for 2 years, using information collected from data loggers, and published the results.

“That’s why I know this wall assembly works” she says, “because I lived in the house for 8 years and there were no moisture issues, I enjoyed fresh air from continuous ventilation, and I was comfortable year-round at a lower temperature setting than other homes I’ve lived in that leaked.”

Martha has used her wall in numerous projects around the Seattle area:

Martha knows and understands building and the codes.  She has been in the construction trade since 1972; she started as a carpenter’s helper and hammered her way through 10 years as a finish, framing and concrete carpenter. After a decade pounding nails she spent four years as a City of Seattle building inspector.  During this period, she was able to see techniques others in the industry were using in new construction of houses and apartments.

Then, Martha worked as a freelance project manager for 10 years, focusing on building projects for developers and other contractors.  Martha’s entrepreneurial spirit led her in 1997 to begin building her own spec homes. She joined Master Builders Association of King and Snohomish Counties in 2001, ascending through the leadership and serving as the organization’s President in 2014.  She was involved with the MBA Built Green program during its initial stages in 2003 and she joined the Building America Program in 2007. Martha has keen foresight which keeps her on the competitive cutting edge of innovative building practices.

Martha’s Wall assemblies utilize a thermal break of ½” – 1” closed-cell sheet foam between framing and plywood combined with other techniques to insure a complete air and weather barrier. The goal of Martha’s wall is to eliminate thermal bridging and to advance air sealing performance for the purpose of reducing energy use and the optimization of a healthy home environment.

Martha’s superior building envelope provides energy efficient R-28 walls, R-48 to R-70 ceilings, R20 under the entire foundation slab; delivering energy performance 50 percent greater than the prescriptive code requirements. Best of all Martha’s wall complies within prescriptive code standards.  Both the City of Seattle and the City of Shoreline have accepted this wall assembly multiple times.She takes a scientific approach: The goal is to design and build a “house as a system” understanding that each part of the home has to work together as a whole to prevent problems and achieve optimal performance.

For example, a tighter building with a continuous sheet of foam in the middle of the wall could potentially trap moisture and cause mold or other problems. So Martha designs her walls to be “breathable” so any moisture can escape to both the outside and inside of the walls. Outside, she uses only real plywood, because it dries more readily than other manufactured products; and instead of a plastic vapor barrier, she applies two sheets of 60-minute building paper with a high perm rating (i.e. felt paper), to allow any moisture to escape out and down. On the inside, sheetrock walls are painted with breathable primers and paints, rather than paints containing polyvinyl acetate (PVA) as a binder which off-gas and retard moisture transmission.

The unit operates 24/7, providing 5 complete air changes per day, while keeping humidity at a constant 30-50% for optimum health of inhabitants and the building itself.

Finally, Martha’s Wall System is designed so that building it varies only slightly from the normal construction process of any of the subcontractors, especially the framers and exterior siding contractors.  Keeping it simple has helped her avoid the need for training or process changes that can increase the cost of labor dramatically.

Compared to the increasingly common approach of exterior foam insulation which requires elaborate connections and rainscreening, there is a major cost benefit in maintaining the prescriptive method using plywood-over-foam.

“I’m a spec builder” Martha explains. “That means I have to build to meet the market, what people can afford, I don’t get the bigger budget like you would with a custom home.  My goal in using foam under plywood on the exterior wall assembly is to achieve greater insulation, air sealing and a thermal break, with minimal increases in labor costs and impacts on construction.”