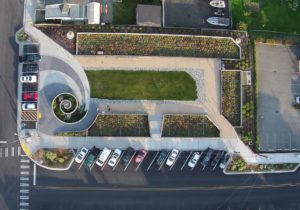 Kitsap County planners developed a vacant lot in the Manchester Neighborhood as a public gathering space with Green Stormwater Solution treatment cells for the 100-acre neighborhood. Also designed to manage a perennial stream, this project demonstrates an opportunity for development areas to treat large quantities of runoff where natural features and space are nonexistent.

In 2007, the Manchester community plan update included goals to improve park facilities and ecosystem services to the shoreline.  Kitsap County’s stormwater management program gave this This Low Impact Development (LID) retrofit project priority ranking on November 24, 2014, and work began July 2015. The project reduces 91% percent of turbidity for Kitsap’s National Pollutant Discharge Elimination System (NPDES) permit. Among thirty conceptual designs for this project, the application of biofiltration media in a public stormwater park was selected, designed for multiple functions including flood mitigation, public parking and gathering space. Public input was obtained to steer the process and Ecology provided $1m for the project, matched by County government allocating $2.5m from roads and stormwater programs. The Manchester Stormwater park treats the entire community’s stormwater in a green facility. The high-value central location was constructed into public space including a small park and natural fountain.

Typical prescriptive paths for treatment require larger catch basins and natural wetland areas unavailable in downtown Manchester, so Kitsap staff adapted Modular Wetlands’ MWS Linear & Bio Clean Nutrient Separating Baffle Box to fit the scope of the neighborhood community. This design allowed for a ninety percent reduction of organic and inorganic sediments, primarily zinc, copper, and phosphorous while also filtering out active biology such as e-coli bacteria. The fountain feature was designed to provide treatment to a permanent stream flow allowing a recovery period for the baffle boxes between storms. According to the builder, the system treats up to 2,000 gallons of rainwater per minute, with 100 million gallons treated annually.  The project is expected to filter out more than 100,000 pounds of pollutants over a ten year period.

Stormwater pressure during peak flow events opens a series of valves in the system and water pushes up through a filtration media planted with a diverse curation of appropriate species, which removes particles and contaminants. A mulching layer at the surface captures large particles and the smaller more permanent media provides a more thorough filtration of sediments. During low flow events, the spiral fountain gurgles with a perennial stream, treated and a prominent feature of the public park.

The Manchester community’s new park is the first of this type in the region and will improve water quality on adjacent beaches where swimming and other aquatic recreation is popular. Motivations for this project as green infrastructure are to comply with LID standards and reduce toxin exposure to the public. This system touts water quality improvement from seasonal storms and can be installed as a retrofit in a small vacant lot along stormwater outfall systems. The relatively densely populated Kitsap peninsula has many of these neighborhood villages, and long term compliance will require more LID retrofits as Kitsap County grows. With the successful innovation of this end of pipe filtration project,, the Pacific Northwest has a model to follow when considering stormwater improvement infrastructure for other compact beachside communities.

This project followed increasing public awareness to stormwater pollution throughout the Puget Sound region. Kitsap County developed a commitment to participation in a regional stormwater treatment campaign and earned Ecology funding for the design. Serving a 100 acre area, the community’s site on a hillside above the Sound afforded limited wetlands and natural stormwater filtration, and hydraulic drainage systems of initial developments lacked sufficient treatment. The challenge for developers was to utilize a high visibility parcel in Manchester as both a wetland biofiltration system and a public gathering space. Planners chose a design with high peak flow capacity and the aesthetic attraction of a grass lawn courtyard with a decorative and functional fountain as the main visual feature.

Chris May of Kitsap County Stormwater program noted the design process followed Filterra tree box design concepts typically used in small scale and residential rain gardens. The innovation to use this technology for servicing an entire community earned Ecology approval but had never been done before. Most coastal communities have been built out without large stormwater ponds, and this option also created a public park for the community. Critical to the success of the project is the spiral fountain which accepts a constant flow of water and allows the Filterra medium to dry out between peak events. Building the concrete forms for the spiral proved challenging and used enough timber for a small house, but the artistic result is an attractive flourish to the park.

During construction on land previously utilized as a fuel station, crews encountered contaminated soils. Preventing contaminated soils from eroding into the Puget Sound during rainy winter days was a challenge, and careful precautions and measures were taken to mitigate the spread during the wet season.
Officials expect the design to last indefinitely for the current community. A sediment trap and topsoil layer of mulch require scheduled maintenance to prevent sediment buildup within the system. Filterra soils are expected to last 20 years without replacement. A high flow bypass is available for exceptional peak flows, but engineering of the system was careful to anticipate even the largest storm events.

While most other stormwater systems require a much larger piece of land for effective treatment, the reality for many of these communities is that there is not land available at all, or within the budgets of county governments. This design allows for a small footprint that could be installed in tight spaces. The Stormwater Center notes traditional detention ponds and wetlands require large and often unavailable land, and Chris May also mentioned installing traditional infrastructure would not have fit the neighborhood character. This version funded by an Ecology grant may demonstrate both success and efficiency and adoption by the market as a scaleable technology application. While it cost $4m, the park will serve Manchester for decades as a gathering point for this small community. The downstream Pomeroy Park swimming beach and adjacent fisheries also benefit from water filtration. This retrofit was prioritized among other LID retrofits in Kitsap County by parcel availability, function, and net benefit to the community and water quality.

It is very important to have team members planning with vision beyond minimum code compliance. By utilizing the Filterra Tree Box design concept, Kitsap planners were able to achieve the water quality standards they sought for the space required and even include space for public gathering. When innovating a project such as this, it is important to remember that Ecology is a traditional organization which maintains their best practices manual.  A project like this needs a team member who is able to pitch and negotiate the design with Ecology or other granting officials.