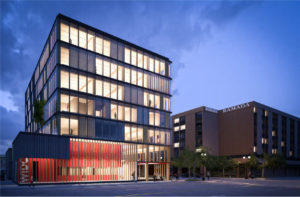 Located in Prince George, British Columbia, at the time the six-storey, eight-level Wood Innovation Design Centre was the tallest multi-use wood building in North America at 29.5 meters (97 feet) tall. It is built from cross-laminated timber panels that have inherent fire-stopping qualities in order to demonstrate that tall wood buildings can be safe, cost-effective, and beautiful, while meeting the Provincial Government’s goal to push the limits of innovation beyond what was normally allowed by BC Building Codes.

For this project, the BC Provincial Government adopted a Site-Specific Regulation (SSR) specifically authorizing this one building to be built as a demonstration project, and directing the use of Alternative Solutions to meet fire code safety and other requirements.   Keys to success were a clear vision for the project and the use of “alternative solutions” including physical testing for fire safety code compliance, while entrusting its execution to an experienced design team, a rigorous peer review process and a trusted general contractor. To achieve compliance, the project team used creative ways to satisfy the fire safety of walls, floors, ceilings and exterior cladding for a building structure made entirely of wood.  For example, to preserve the beauty of bare wood on interior ceilings, they used a floor system with two layers of CLT running parallel to each other laid with gaps between them to create an all-wood structural section with recessed channels where utility chases, fire and acoustic protection and equipment could be hidden and wood’s beauty retained.  This innovation and others were approved as alternative solutions.

With years of research and testing giving them confidence that a taller wood building was possible, the BC Provincial Government wanted to push the limits of innovation with a building that went beyond existing code, which currently allows no more than six stories for non-residential wood buildings. So before engaging the design-build team, they developed and adopted a Site-Specific Regulation that amended the BC Building code to increase the allowable building height on this one project to 30m.  The SSR also added an allowance for combustible construction materials, and specified fire testing requirements CAN/ULC S102-07 and S134-92 be applied to the Group A and Group D (Commerical and Educational) occupancy types defined for the project.

They later realized that even the amended code didn’t leave enough room for innovative solutions, so the SSR was amended a second time to direct the use of “alternative solutions” a recognized 3rd compliance path under BC codes.

In WIDC, the timber structure is exposed, rather than encapsulated with drywall (as is required to protect other types of construction).  Steel connectors are embedded and concealed within the timber elements; fire-resistant wood elements in fact protect the fire-susceptible steel connectors. The entire building core including exit stair is constructed of CLT. 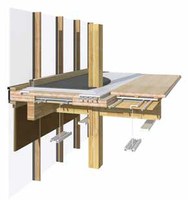 Mass-timber columns and beams and the thick floor cross-sections provide inherent fire resistance, because large-timber elements char at a slow and predictable rate, and can carry the structural load required to achieve a 1-hour fire-resistance rating.  Yet to prove fire resistance through a fully engineered approach, rather than the more common encapsulation method, required special testing according to accepted procedures.

Extensive engineering analysis and physical testing was performed to demonstrate effective smoke and fire separations.  PCL Constructors engaged Steve Craft, fire science engineer with CHM Fire Consultants of Ottawa to analyse previous research, and to identify gaps where unique assembly details had not previously been tested.  PCL partnered with Intertek Labs at University of Vancouver who conducted the tests according to ASTM and ULC standards.  These included:

Developed as a demonstration project to show that tall wood buildings can be cost-effective, efficient and beautiful, the 6 storey, 29.5 meter (97 foot) tall Wood Innovation Design Center was designed with a simple, restrained building form.  The design team wrote “Simplicity lends itself to a practical and essential goal:  that the design be a repeatable and expandable template for constructing future tall wood buildings of different sizes and functions.” The project will advance wood education and innovation in the province, enhance expertise in wood manufacturing, product development and engineering.
Compared to traditional steel and concrete structures, building with wood offers economic and environmental benefits as a locally-grown and manufactured renewable and easily recyclable natural resource that sequesters atmospheric carbon throughout the products’ life-cycle.

Design of this building was a unique challenge because of all the unknowns, overcome through a fully collaborative approach that involved not just all the trades, professionals and testing labs, but also regulators as partners in the design-build process.  With clear design objectives at the outset, and consistent modelling from fabrication to installation, the Building Safety and Standards was able to accept a level of risk by sharing responsibility with an experienced design team, peer review group and trusted general contractor to ensure compliance with all fire safety requirements.  The City of Prince George (local jurisdiction) in turn yielded regulatory authority to the Province based on the assurance it would meet all applicable codes.  Nonetheless, local fire officials also participated in peer review and inspections at critical points in construction.

The building is owned by BC Provincial Government the with the first 3 floors reserved for the University of Northern British Columbia with demonstration, classroom and laboratory space for a Masters in Wood Engineering program, and the upper floors for government office space and wood industry associations.