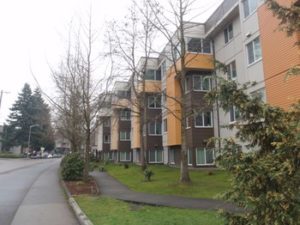 The Blakeley Manor project was one of several similar projects consisting of a full exterior wall rehabilitation to improve building envelope performance of an existing 4-story 70-unit senior housing facility owned and managed by the Seattle Housing Authority (SHA).  Existing exterior wall cladding of stucco installed over wire lath and building paper was removed and replaced with an innovative assembly of new plywood sheathing, continuous, higher density mineral wool insulation covered with fiber cement siding to provide 1-hr fire rating for both “outside-in” and between floors.  This was reviewed and approved through a code modification request.

The retrofit project was done to improve the waterproofing, air barrier, and thermal performance of the wall assembly.  However, a surprise interpretation by Seattle DCI required the wall to meet a 1-hour fire rating from both inside-out and outside-in, so the design team altered their original assembly by eliminating 2×4 vertical furring strips and installing a continuous 1 ¼” thick higher density mineral wool insulation layer over the liquid WRB/AB and plywood sheathing.  Their innovative approach increases fire safety, and provides potential improvements in thermal performance.  To gain approval, they submitted a Code Modification Request for showing their alternative method met the intent and purpose of the code for this project.

RDH as the Architect of Record provided a code analysis contending that our proposed assembly alternate with continuous mineral fiber insulation in lieu of the discontinuous insulation was the equivalent of a 1-hour rated wall as calculated from the outside to the inside and between floors. GGLO as the design architect, who had submitted all previous joint RDH/GGLO SHA projects for permit, scheduled a meeting with Mr. Kaveh Aminian of the City of Seattle DCI. Sam Packard of RDH and Amy Hartwell of GGLO were in attendance. The Code Modification Request (CMR) was presented and discussed at the first meeting and was received by Mr. Aminian for further SDCI review. In a subsequent meeting with Amy Hartwell of GGLO, the CMR was approved with the added condition that, in order to increase the fire resistance of the wall assembly, they increase the density of the proposed mineral fiber insulation from 4.4lb /cu ft to 8.0lbs/cu ft.

The Blakeley Manor project consisted of a full exterior wall rehabilitation of an existing 4-story 70-unit affordable senior housing facility owned and managed by the Seattle Housing Authority (SHA), to improve waterproofing, air barrier, and thermal performance.  Existing fire-rated exterior wall cladding of stucco installed over wire lath and building paper was removed down to the wood stud framing.  It was replaced with an innovative assembly consisting of continuous, higher density mineral wool insulation covered with a rainscreen fiber cement siding system.  This was one of several similar envelope rehabilitations RDH and GGLO had previously completed for SHA’s senior housing portfolio. However, during a previous project, their typical wall assembly design – consisting of adding plywood sheathing for structural shear, a liquid-applied WRB/AB, 2×4 furring strips and fiber cement siding to the existing wood frame construction – was deemed “failed” upon City inspection: because of the discontinuity of the friction-fitting insulation between the 2×4 vertical furring, it could not achieve a 1-hour rated exterior wall from the outside face without the addition of Type ‘X’ exterior gypsum sheathing.

On the earlier project, the team added exterior gypsum sheathing in the field to several areas to achieve compliance.  Then for the Blakeley Manor project they proposed a code modification specifically designed to improve the fire resistance of the wall assembly and  provide a minimum 1-hour rating from both the interior and exterior sides, required for buildings over 3 stories without a fire sprinkler system.    See the details outlined in the attached Code Modification Request letter, but to summarize: they obtained approval of the equivalency to rated 1-hour fire resistance rated from both interior and exterior sides by providing continuous mineral fiber insulation over the liquid WRB/AB and plywood sheathing, creating a continuous more fire resistant assembly. Instead of 2×4 vertical furring strips, cladding is held in place with nails driven through 1×3” strapping strips, through the insulation, and into the existing wood studs behind the insulation (per mfg. recommendation).  A report was provided from the manufacturer showing the ability of mineral wool to support gravity loads and deflection under gravity weights up to 30 pounds/sq. foot.  The goal of this proposed assembly was to improve the overall thermal performance of the exterior wall with the addition of continuous mineral wool insulation while providing the required fire resistance.  After discussions with DCI, the team also agreed to increase the density of the mineral fiber from 4.4lbs/cu ft to 8.0lbs/cu ft in order to provide additional fire protection.

SHA as a long term property owner is interested in the long term performance of the buildings it owns and manages.  As such, it attempts with in its limited budgets and funding to employ quality building components, proper detailing for water proofing, air barrier performance and thermal efficiency.  An energy benchmarking process as well as a study of past and current SHA building performance is being conducted by SHA and Rich Krug with the City of Seattle.  Preliminary review indicates that no definitive conclusions can be made until other variables are considered.  For example, while all of the projects have had improvements to the walls and windows, most have not been re-roofed with added insulation nor have had the air barrier continuity of the exterior wall system integrated with the roof.  Another important variable is the impact of bathroom and kitchen exhaust on the data.  Preliminarily, in some cases it appears some theoretical energy savings are being exhaust to the exterior.  The next project in design includes, as well as the wall assembly described in this document, a re-roof with an unvented assembly and added R-50 insulation, and detailing to maintain a continuous air barrier from wall to roof.  SHA is also exploring funding to install ERV/HRV’s.

The project team has since applied the same CMR and wall assembly on 2 more completed projects and 3 projects in design or just starting construction.  Seattle DCI requires that they provide updated CMRs with each new envelope rehab submitted for building permit. Therefore, with each new project we update the property’s information, confirm building code citations are current.  Roxul now produces a commercial-grade mineral wool that’s 11 lbs/cu ft rather than the 8 lbs/cu ft which the company will use in the future.