Solar Canopy at The Bullitt Center 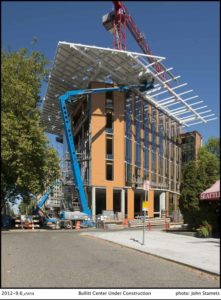 The Bullitt Center aspires to be the “greenest commercial building in the world” by pursuing the Living Building Challenge which includes a net-zero energy goal to produce all the energy the building uses. The Northwest’s variable amount and intensity of daylight affects solar production values, so scaling the system to meet the needs of a six-story building required a 244 kW array with 575 solar panels, which installed cover an area larger than the footprint of the building, creating a solar canopy overhanging the sidewalk 6 stories below.  Normally this would not be allowed, but a land use interpretation helped them gain approval.

The designers of the Bullitt Building were faced with the problem of the large photovoltaic array overhanging the sidewalk of East Madison Street, 15th Avenue East, and to the centerline of the alley between East Madison Street and East Pine Street. Under normal circumstances, this would not be allowed.  The designers approached the Seattle Design Commission with the barrier and developed a presentation explaining their situation. The PV array is 76 feet above the sidewalk, and some light will be able to get through the panels and allow for plant growth and normality below. The Seattle Design Commission granted the designers of the Bullitt Building an exception to the land use ordinance Title 23 LAND USE CODE, Subtitle III Land use regulations, by considering the photovoltaic array to be an awning normally reserved for canopies one or two stories above the sidewalk.

Due to Seattle’s climate with fewer sunny days than other parts of the country, the Bullitt Building’s photovoltaic canopy extends over the edge of the building into the public realm. The photovoltaic panels constructed on the roof of the Bullitt Center in Seattle have helped the project in their pursuit of the “Living Building Challenge” goal of net zero energy consumption for the center, that all energy to be used on site will be produced on site.  The building uses 25% or less energy than a building of similar size and use: With a year 1 EUI of 9.4, they used approximately 90% less energy than an average building, and expect the EUI to settle at approximately 12, which would still represent more than 80% less energy than an average building in Seattle. To build an array of adequate size to meet the expected energy use, the Photovoltaic array will have to extend over the public sidewalk below, creating a code compliance challenge for the designers. They explored permitting the array as a “sky bridge,” normally reserved for an elevated pedestrian walkway connecting two buildings or other structures over a public right-of-way. However, the Bullitt Center would have to pay sixty five thousand dollars a year in taxes to the city which was too costly.  In the end an exception was given to the Bullitt Center designers to permit it as an awning, or “canopy” due to the innovation and green technological achievement of the Bullitt project, and their participation in the City of Seattle’s Living Building Pilot Program. This new citywide ordinance, Seattle Municipal Code 23.40.060, says, “The purpose […] is to establish a Living Building Pilot Program. The goal of the Pilot Program is to encourage the development of buildings that meet the Living Building Challenge by allowing departures from code requirements that might otherwise discourage or prevent buildings from meeting this standard.” This ordinance means that special conditional-use permits, exceptions and variances are either more easily obtained or allowed by the city. An interesting note about this ordinance is its intention to help Seattle code officials understand where current code creates barriers for green design. Code innovations uncovered during the pilot program are helping shape current and future Seattle building codes.

The design example may be viewed on Bullitt’s website: http://bullittcenter.org/building

To read further about the lessons learned, click http://bullittcenter.org/learning

To read about the progress of Local Ordinances Related to the Living Building Challenge, read the Report Prepared by Cascadia Green Building Council for King County GreenTools

in its first full year of operations, the Bullitt Center generated 60% more energy than it used from the PV array on its roof. While we expect this surplus to decline in the second full year (due to higher occupancy levels), we do expect the building to be net positive. As a result, the design team could have reduced the size of the PV array, including the cantilever over the sidewalk. This would represent a potential cost savings to future projects, even net zero projects in Seattle. The surplus is due largely to levels of efficiency that exceeded expectations. The solar array is performing as expected.

Articles in the Seattle Daily Journal of Commerce:  http://www.djc.com/special/BullittCenter/