The city of Vancouver, British Columbia created the EcoDensity Initiative and relaxed regulations to encourage the construction of laneway houses with the intention of increasing density and creating alternative housing options in an unaffordable housing market.  Since the inception of the program over 2,660 permits have been issued and density has been increased without altering the character of the neighborhoods.

The city of Vancouver, British Columbia is in the midst of a housing crisis that has been four decades in the making. The city has extremely high land costs– the average single family home currently costs $896,000– the lower mainland region has limited land available for development due to the mountains to the north, the water to the west and the U.S border to the south. According to the 2011 census 60% of the total occupied dwelling units were apartments and over half of these were more than five stories. Of the 309,418 total dwellings in Vancouver, 47,535 are single family detached houses.

In 2008, chief city planner Brent Toderian and Mayor Tom Sullivan created the ecodensity initiative. The focus of the initiative was to increase housing density to address multiple issues– the housing shortage, affordability and environmental concerns. The purpose of revising the zoning and development by-law section 11.24 is to encourage more laneway houses (LWH) as affordable alternative housing options.

By November 2010, 100 laneway housing permits had been issued and the council directed staff to report back on key issues. In 2011, City council approved the Housing and Homelessness Strategy with a goal to add 6,000 rental units by 2021. The council also approved the 3 Year Action Plan which aims to expand the Laneway housing program to other zones. In 2013 the staff recommended  amendments after gaining community feedback through surveys and conducting research. They reported on neighbourliness, livability, the permit process and parking. The staff recommended encouraging more single story dwellings to maintain privacy, a faster review process for such one story homes and requiring an external parking space. Amendments were approved in July 2013.Some of the big changes included requiring one uncovered parking space and expansion to all single family zones.

Laneway houses are permitted on all residential single family zones whose lots meet size and access specifications. The program is being considered in some RT (residential two family) districts as well. For a one story LWH that meets all guidelines there is an outright review process (as opposed to “conditional use” review) and a permitting fee of 1,000 dollars. The review process for 1 ½ story LWH takes 4-6  weeks on average.

Homeowners can apply for a permit and follow the guidelines for the application process. For a one story LWH there will be outright approval if it meets all the guidelines. The width of the lot must be a minimum of 32 ft. The floor area of a the LWH must not exceed the lesser of A) .16 multiplied by the site area or B) 275 sqft. The one story LWH must be 16 ft from the other dwelling on the property and be at least 3ft from the rear property line. A one story must not exceed 12 ft in height if the dwelling has a flat roof and 15 ft at the highest point of a roof that is not flat. A 1 ½ story LWH can have a maximum height of 20ft if the roof is not flat. See additional guidelines here.

Average rents for the City of Vancouver were gathered from Craigslist postings between January 2010 and October 2012. The findings show that one bedroom LWH rents were similar to other market rental units around $1,450 per month. Two bedroom LWH rents were significantly cheaper than two bedroom market rentals– an average rent of $1563 for a LWH versus $2,067 for a condo, single family house or other market rental. Two bedroom LWHs thus provide a more affordable rental option and contribute to the solution for Vancouver’s affordability problem.

Laneway houses also provide alternatives for seniors. These single story homes provide families with the option of having their elderly loved ones close by but still allows for privacy for both the family and the senior. Retirement homes are expensive and this option allows for the senior to still retain some independence if their health allows.

The cost to build a laneway house averages between $200,000 and $300,000, which for the average homeowner is pretty unattainable (although over 2660 permits have been approved). In Vancouver there is no owner occupancy stipulation so it is possible that developers with the available capital can purchase a single family home and build a laneway house– using both as rental income. This allows for more laneway homes to be built since it allows for outside investment. The average homeowner doesn’t typically have the extra cash laying around to cover construction costs (about ¼ of laneway houses are built by a homeowner who is retaining the main house, the other ¾ are built when the whole site is redeveloped). The rental income from the LWH would eventually pay down the costs, but on average a homeowner doesn’t stay in the home long enough to see the returns. The addition of a LWH increases property value when it is time to sell.

During the code adoption process there was worry and pushback in regards to the parking issues that additional density could present. Reports have shown that there are a handful of calls per year regarding parking issues in neighborhoods with laneway houses. There was enough pushback that the council added an external parking spot requirement. Instead of being able to have an internal parking spot, it is now required that the homeowner has one external spot uncovered. Heather Burpee, a senior planner for the city, attributes the success of the program to the flexibility it allows. A LWH is allowed in addition to a secondary suite in the main house and there is no requirement for owner occupancy. If other cities want to increase density using LWHs or DADUs or AADUs the city will have to remove restrictions.

Portland and Seattle have been having similar issues with housing affordability, but have seen less success with attached and detached accessory dwelling units. According to a sightline study 35% of single family houses in Vancouver have secondary dwellings while only 1% of lots in Seattle and Portland have secondary dwellings. The discrepancy is partially due to strict regulations about owner occupancy, parking and total occupancy limits. 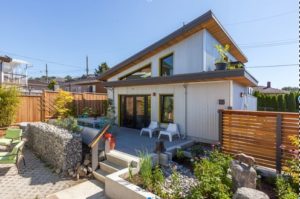