In December 2009 the City of Seattle wrote a page in the history of green building leadership, when their City Council adopted Ordinance 123206, establishing the Living Building Pilot Program. The Program’s goal is to promote buildings that meet the Living Building Challenge (full Certification or Petal Recognition) by providing flexibility in development standards in Seattle’s Land use codes.  The Bullitt Center building in the Capitol Hill Neighborhood was the first to be built under the Program.

The adoption of Ordinance 123206 by the Seattle City Council marked the culmination of years of research and collaborative partnership between the City and King County, the non-profit International Living Future Institute and the Bullitt Foundation, exploring how to overcome systemic code and regulatory barriers to implement the Living Building Challenge (LBC) through municipal approval processes.  The LBC is the world’s most stringent building certification regime, one that goes beyond sustainability to demonstrate that truly restorative development is possible.

The goal of Seattle’s Living Building Pilot Program is to promote buildings that meet the LBC (full Certification or Petal Recognition) by providing flexibility in development standards in Seattle’s Land use codes – in the form of floor area ratio and height bonuses. In exchange for developers’ commitment to LBC Certification, their projects also move to the front of the permit line through the Priority Green program and receive a coordinated staff review, intended to help identify and resolve issues for complex projects before they get stalled in the permit process.
The City Council reauthorized the Program 2016 for another ten years and 20 more projects through 2025.

The developers of the Bullitt Center, arguably the “greenest office building in the world” worked closely with the Seattle, King County and other partners, providing expertise and collaboration which informed the development of the Pilot Program. Later their building became the first building permitted and built using land-use departures and incentives allowed by the program.  Construction was completed in 2012.

The Program was first adopted by the Seattle City Council in December 2009 (Ordinance 123206), amended in 2012 (Ordinance 123942) and again in July 2014 (Ordinance 124535).  Then in June 2013 Council adopted Resolution 31400, requesting the Department of Planning and Development develop recommendations for improving the Living Building Pilot Program.  In 2013 a Technical Advisory Group was convened to evaluate and propose revisions to the Program, including technical experts from industry, and a community organization. Their input informed recommendations to the Mayor and City Council for the 2014 amendment.

Finally it was amended again in 2016, and renewed for another ten years and up to 20 projects. For full details of this adoption and revision process 2009-2016 and changes in the 2016 ordinance, see Director’s Report and Recommendation.

Eligible projects in the Living Building Pilot Program must be outside the city’s shoreline jurisdiction and must go through the City’s design review process. Design review is a component of Seattle’s Master Use Permit (MUP) application that is required for most new commercial, mixed-use and multifamily developments. Design review will be required for both new and existing buildings in the program.  Single‐family residential buildings are not eligible. Developers must submit an application and a plan for how their project will meet the Living Building Challenge.

Eligible projects can request departures from Land Use zoning and design standards that present a conflict in pursing the Living Building Challenge. Design Review Board reviews and recommends whether each departure request would help the development meet the Living Building Challenge. Applicants may request departures through the existing Design Review process from the following standards:

Any code modifications needed to comply with building, energy, mechanical or plumbing codes are handled administratively by building and health departments; and in some cases through the City’s Innovation Advisory Committee (IAC).

Projects will have to achieve the Living Building Challenge SM 3.1 certification set by the International Living Future Institute (ILFI) or the ILFI Living Building ChallengeSM 3.1 Petal Recognition certification and supplementary energy and water standards.  Within two years of the final Certificate of Occupancy, applicants must submit a third-party report demonstrating compliance with the LBC or Petal requirements, based on one year of post-occupancy operation performance data.  To avoid penalties of 5% of total construction cost, any problems in design and construction must be addressed and performance issues resolved, though the applicant can request an extension if they can show the extra time will result in achieving the certification. 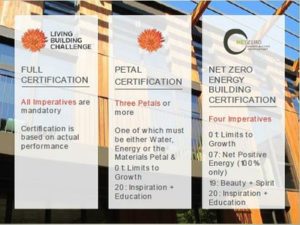 The LBC is a sustainable building certification program that focuses on a performance-based approach to certification with the aim of producing buildings that are less harmful to the environment than conventional buildings and contribute positively to their surroundings. It was created by ILFI as a green building rating system in order to recognize buildings that achieve the highest level of sustainability. Version 3.1 of the LBC requires buildings to meet 20 imperatives (i.e., requirements or prerequisites) within seven performance areas or petals: Place, Water, Energy, Health and Happiness, Materials, Equity and Beauty. In general, the imperatives require buildings to be built on non-environmentally sensitive sites, use recycled materials, generate as much or more electricity as they use through sustainable sources, capture as much rainwater as they use, treat wastewater on site, and meet standards for other elements.

In addition to the certification program, ILFI also offers Petal Recognition. The performance criteria for at least three of the seven areas, or “petals,” must be met in order to receive “Petal Recognition.” Recognition is further contingent upon the development demonstrating compliance with at least one of the following petal categories: Water, Energy or Materials. Additionally, certification is based on achievement of a number of “imperative” categories to demonstrate that a building can have a positive effect on the non-built environment. Two imperatives; 01: Limits to Growth and 20: Inspiration and Education, must also be met.

When the Seattle City Council renewed the program in 2016, they decided to allow some of the existing departures, such as additional height and floor area, to be approved by the Director as a Type I decision (no appeal), as opposed to discretionary Type II decision (appealable to the City’s Hearing Examiner).  This was intended to offset costs of permitting and provide greater certainty in the approval process.  The following incentives will be available to any project enrolled in the Program  1) Increased height (up to 10 feet in zones with height limits up to 85 feet and 20 feet in zones with height limits 85 feet and above); and 2) Up to an additional 15 percent of floor area.  These amounts are additional to any other bonus or extra floor area and height otherwise allowed by codes and incentives (e.g. affordable housing).

The benefit of the Living Building Ordinance itself to the Citizens and environment of Seattle is immeasurable. The value of green building leadership in attracting developer investments is part of what makes Seattle the hottest commercial real estate market in the United States (2016).

But what of Living Buildings?  Do they pencil out?  In a financial case study of the Bullitt Center, the first building completed under the program, the authors were confident that “with what we know now, and in the revised regulatory environment – the project could be developed today for a significantly lower cost” than its 32.5 million price tag.  That cost was increased by a number of factors – the additional pre-construction design and regulatory costs of developing such an innovative project, the small difficult site, and several other unknowns.  Factoring out some of these variables, and factoring in the experience gained by both developers and industry, they concluded through a careful analysis that “for many owners and developers who plan to own and operate a building for a long time… a compelling case can be made that the very high-performance deep green buildings can pass financial tests while also delivering a valuable stream of mission-oriented “external” public benefits.

As of 2016, three projects were participating in the Program: the Bullitt Center, Stone34 project, 901 7th Avenue. The Bullitt Center was the vanguard achieving full certification under the Living Building Challenge in April 2015 (see related case studies).  The Stone34 project is pursuing the requirements under the former Seattle Deep Green program, which at the time included LEED Platinum certification, but this level was subsequently removed from the Land Use Code in the 2014 update of the program (ordinance #124535).

According to the City of Seattle Department of Planning and Development: “The overall purpose of the Living Building Pilot Program is to encourage the development of extremely high-performing buildings that can reduce environmental impacts, test new technologies, and serve as models for building design and operation both regionally and nationwide in order to translate innovation into common practice. “

They have put this goal into action by working with a Regional Code Collaboration of 40+ jurisdictions, which have been observing the program, and working together to develop a model LBC Pilot Ordinance which other Cities and Counties can adopt. Now the City of Shoreline, WA is considering a draft “Deep Green Incentive Program” modeled after the LBC Pilot Program, and other cities are considering similar legislation, including Kirkland, Redmond and Issaquah.  King County’s climate action plan adopted January 2016 includes registering 10 new Living Building Challenge Projects by 2020.   The Regional Code Collaborative can provide input and support to any jurisdictions that would like to adapt a similar approach.

SDCI has reviewed the staff resources required for the Bullitt Center and Stone 34 projects (901 7th Avenue is still in permitting) against comparable projects not enrolled in the Program. Stone34, which used the Deep Green pathway, required significant staff time and resources to determine baselines and measurement procedures. Staff experience with review of these two projects contributed to the recommendation to link the Program to the LBC and simplify the compliance requirements (see below) in order to minimize the impact on staff resources.