Oregon created a permit pathway for using graywater to flush toilets and urinals in 2008, becoming the tenth US state to do so.  To date less than a half dozen projects in the State (at least one residential, one institutional, and two food coops) have utilized this alternative method and most of them have uninstalled the systems. Treating and storing graywater to meet the high quality standard required is often cost-prohibitive. Several large-scale projects like Hassalo on Eighth and OHSU’s Collaborative Health Building have found it more cost effective to treat all combined wastewater (aka gray- and blackwater) for reuse together.

In 2008, Oregon adopted a statewide alternative method allowing graywater from sinks and showers to be reused for flushing toilets and urinals.  These methods can apply to residential and commercial projects anywhere in Oregon because Oregon has statewide building codes. Since Oregon’s Plumbing Code regulates graywater systems within a structure, projects are required to obtain a plumbing permit from the local building department. Graywater reuse can reduce overall water demand by meeting the buildings nonpotable water demands for toilet flushing, mechanical cooling, and more. Often 80% of a residential building’s water demand can be met by nonpotable water (US EPA 2008).

Graywater in Oregon means water used in bathtubs, showers, bathroom washbasins, clothes-washers, and laundry machines that is captured and reused on site. Graywater in this ruling does not include wastewater from toilets, urinals, kitchen sinks, or dishwashers. Graywater must be treated before it is reused for toilet flushing to prevent it from turning septic during storage, clogging the pipes with bits of lint or discoloring the toilet bowl. A typical graywater reuse system has a primary settling tank, multi-stage rotating biological contactor, secondary settling tank, UV disinfection and a final water storage tank.

In 2003 Senate Bill 820 directed the Oregon DEQ to look into opportunities and barriers to wastewater reuse in urban areas and report back to the Legislature within a year. In the task force’s final report they   identified graywater reuse as a promising topic “worthy of review”, noted that California and Arizona allowed it’s reuse, and recommended that Oregon develop a clear and coherent state policy promoting water reuse.

In March 2007 Central City Concern was considering creating a net-zero water multifamily high rise and pulled together a Water Team to spend two years “clarifying the water systems and regulatory steps required to achieve a water-independent building in Oregon.” The Water Team was composed of their development team: SERA architects, Interface Engineering and Gerding Edlen Development. Their report ‘Achieving Water Independence in Buildings’ highlights what they learned and who they worked with through their process.  The team used the example of a hypothetical Pearl district multifamily high-rise to reveal potential barriers and discuss the issues with developers and regulatory officials. The Water Team then attended the Graywater Reuse Forum put together by Recode and the City of Portland’s Office of Sustainable Development. After the forum Jon Gray, then Vice Chair of the Oregon State Plumbing Board, worked with the Plumbing Board and Oregon State Building Codes Division to craft language for the alternative method for indoor graywater reuse for toilet flushing and urinals and for rainwater reuse which was approved in July of that year.

Oregon’s alternate method for graywater systems focuses on manufactured, “off the shelf” systems. This alternative method allows prefabricated systems that are listed to the IAPMO IGC 207-2006 or CSA B128.1-2006 standard or ANSI product-listing program. IAPMO maintains a list of manufacturers that have submitted for approval through IAPMO, but does not show manufactures that have sought testing with other testing agencies like CSA or others. The system may be a combination of holding tank, pump and automatic chemical treatment device. The ruling requires that all toilets that use flush with non-potable water are clearly marked non-potable and all piping is marked by purple tape or painted purple. Brac Systems had an approved sump pump for graywater conservation system, but has since gone out of business.  According to both alternative methods “All piping and plumbing component materials [of a graywater system] shall be approved for their specific use in the Oregon Plumbing Code or be listed by an ANSI accredited product listing program.”

In order to comply with this alternative method components must meet certain certification and standards as mentioned above and properly identified as to the manufacturer. Both the residential and commercial alternative method require several prescriptive requirements that inspectors will look for like making sure all valves are accessible, holding tanks are made and installed to certain specifications, non-potable water lines are labeled as such or run through purple piping and several other requirements. A project must have approval from the Oregon Department of Environmental Quality if they want to discharge water from the system outside of the building served.

To date less than half a dozen projects have used this code to reuse graywater for flushing toilets or urinals. Nike’s upcoming Beaverton Campus is planning to reuse graywater for toilet flushing, which if completed will make it the largest indoor graywater reuse project in the state. To date only one single family residential project has been identified using this code. The five commercial projects that have utilized this alternative method include one institution (the OSU/OHSU Collaborative Health Science Building), two food co-ops (Corvallis’s First Alternative Co-Op and Portland’s People’s Food Co-op), and two multi-use residential buildings (Bud Clark Commons and Hassalo on Eighth). Both food coops have uninstalled the systems and the residential system is currently broken. There are three larger (high rise and institutional) projects reusing graywater in combination with the whole buildings wastewater that are permitted as Water Pollution Control Facilities (WPCFs), regulated by the Oregon Department of Environmental Quality (DEQ).

No accessory dwelling units have been identified to date reusing graywater for interior reuse. The City of Medford, Jackson County, City of Eugene, Lane County, and Coos County and Lane County inspectors said that they have not seen any graywater indoor reuse permits for any size projects.

Private Residence of Pat Lando in Portland, Oregon. The house has a Brac system, which is currently not working. The system was designed to reuse water from sinks and showers for flushing toilets.  The system is not currently operational.

The People’s Food Coop in Portland, Oregon. The Coop installed the system in 2012 and shut it down in spring 2015. The system was designed to reuse water from all sinks in their grocery store including hand washing and dishwashing sinks to flush toilets. The pump from the graywater tank to the toilets clogged daily, would be unclogged and then would clog again by the next day. The pump was replaced, but still did not fix the issue. The parts used were a holding tank and a pump from Brac systems who has since gone out of business.

First Alternative Co-op in Corvallis, Oregon. This small grocery store installed a system with help from local engineering students in 2012, but has since been uninstalled. Graywater was supplemented with rainwater to flush toilets. The graywater system was uninstalled because of the system did not drain or pump adequately and the manufacturer, Brac, went out of business. According to one volunteer, “It is now disconnected because we never solved the problem of dealing with the graywater drainage from the sink– flowing into the sump and then pumped into the Brac. The Brac cannot adequately deal with soap and when it drains first to the sump pump, that collection site becomes a petri dish for bacteria – too much for the Brac to handle. We have been out of funding sources and none of our volunteers can figure out how to manage the problem.”

ud Clark Commons features graywater reuse for toilet flushing. Photo by Holst Architects.Graywater Reuse in the Apartments at Bud Clark Commons in Portland, Oregon was completed in 2011. One of the first permitted project in Portland to reuse graywater to flush toilets. The building uses 53% less potable water than a conventional project because the project uses low flow fixtures, rainwater to water the courtyard’s landscaping, and graywater for toilet flushing. The eight-story structure provides transitional and supportive housing and support services for people seeking permanent housing, including 130 studio homes (see separate case study on Bud Clark Commons).

OHSU South Waterfront Medical Office Building (Center for Health & Healing): This was the first LEED platinum medical and research facility. The building has an onsite combined wastewater treatment system that treats 15,000 gallons per day.  Once the water is treated it is blended with other water sources and reused for toilet flushing, cooling tower water, and landscape irrigation through a DEQ water pollution control facility permit (WPCF). The water usage of the building is reduced by 49% compared to a typical code compliant facility with an estimated 5-9 year pay back according to Interface Engineering. Intelligent Community Services, a company specializing in small utility solutions, runs the treatment system and holds the WPCF permit with Oregon DEQ. The project has a NPDES-IW-B16 permit. According to the DEQ OHSU utilizes an interception type treatment system at this building. The wastewater treatment system operates independently from the City of Portland and is permitted independently (DEQ 2009).

Precedents Outside of Oregon:

Bertschi Classroom in Seattle was completed in 2011 and reuses graywater to nourish a living wall (see separate case study on Bertschi School). Phipps Conservatory in Pittsburgh, PA also uses graywater for a living wall in a classroom. Phipps was completed in 2015. San Francisco’s Public Utilities commission building is a 13-story building with gray and blackwater treatment, with graywater being reused to flush toilets. Since 1991 an office building in Irvine, California has used graywater for toilet flushing. NESTT Center at Eastern Washington University will use graywater for a living wall if completed as planned in 2016. Rocky Mountain Institute’s innovation center was built in 2015 to reuse graywater for toilet flushing, but is waiting for Colorado to create a graywater permitting program. In 2016 Colorado passed a house bill legalizing graywater reuse and is developing a permit program.

One of the larger upcoming projects is Parkmerced in San Francisco. The project is a renovation and expansion of a World War II era subdivision. The 152-acre site will be retrofitted and expanded to reuse graywater indoors and out. According to the San Francisco’s Non-potable Water Ordinance as of November 2015 all new buildings over 250,000 square feet in San Francisco must treat all wastewater onsite and use available alternative water sources for toilet and urinal flushing and irrigation.

Grey Water Systems based in Toronto is installing and selling graywater reuse systems for indoor and outdoor use for all scales of commercial/industrial projects and soon single family residential houses. They are currently in the process of getting a graywater system certified to the NSF 350 standard, a certification, which is permitted by many jurisdictions in the US including Oregon.  Their installations focus on reuse of stormwater, rainwater and graywater.

While graywater reuse for toilet flushing and cooling mechanical systems can save a lot of water, it is possible for the treatment of the graywater to cost more than the value of water saved.

Central City Concern estimated that buildings reusing rainwater and graywater for indoor reuse like toilet flushing could achieve 60-70% water savings. Despite such dramatic promises for water reuse few projects have incorporated it. 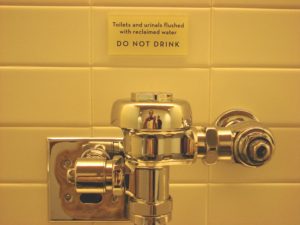