In 2011, Oregon created a permit pathway for reusing graywater to water landscapes in commercial and residential projects. There are three tiers to the permits,based on the level of treatment needed for final end use of the graywater. To date twenty-six tier 1 permits have been granted and one tier 2. The rules establish treatment and monitoring requirements, setbacks, access and exposure controls, site management practices and an annual renewal fee.

Oregon’s graywater program for outdoor reuse was initiated by House Bill 2080, which was passed by the 2009 Oregon Legislature carried by then House representative Ben Cannon and then Senate member Jackie Dingfelder, requiring the Oregon Department of Environmental Quality (DEQ) to develop and adopt graywater rules. These rules can be used by residential and commercial projects. Oregon is one of five states with a tiered permitting program, meaning there are different requirements depending on the level of treatment and amount of water treated.

Graywater for the purposes of the Oregon DEQ’s outdoor reuse program means water from kitchen sinks, bathroom sinks, bathtubs, showers, bathroom washbasins, clothes-washers, and laundry machines. Graywater in this ruling does not include wastewater from dishwashers, garbage disposals, toilets, wastewater from the washing of cloth diapers or wastewater that contains hazardous chemicals (like rinse water from washing oily rags or paint brushes, pesticides/herbicides, and photo-lab chemicals).

Graywater can reduce overall water demand by reusing water directly for landscape needs. Graywater provides a consistent year round source of irrigation water for a site’s outdoor plantings, which can allow plants that wouldn’t otherwise be adapted to the site’s natural water sources.

To date twenty-six tier 1 permits have been granted and one tier 2. All installations have been at residential single-family projects, except one which was part of an accessory dwelling unit. There are three tiers to the permits based on volume and level of treatment. Over half of the permits (14/27) are in Jackson County near Ashland, Oregon. One system has been permitted in the city of Bend, Oregon.

Hassalo on Eighth is reusing graywater and blackwater for toilet flushing, mechanical system cooling, and landscape irrigation. Hassalo on Eighth combines black and graywater (toilet wastewater and all other fixtures) before treatment, so it is permitted as a wastewater treatment facility with a water pollution control permit by DEQ and not through the graywater reuse program.

Back in 2003 Senate Bill 820 directed the Oregon DEQ to look into opportunities and barriers to wastewater reuse in urban areas and report back to the Legislature within a year. A Water Reuse Urban Taskforce was formed of representatives from cities and districts, engineering consultants, the Governor’s office, health services, the water resources department, builders associations, industry representatives and building and plumbing agencies to create one report through four meetings in one year. In the task force’s final report they identified graywater reuse as a promising topic “worthy of review”, noted that California and Arizona allowed it’s reuse, and recommended that Oregon develop a clear and coherent state policy promoting water reuse. The task force also recommended:

In April 2008, Recode partnered with the City of Portland’s Office of Sustainable Development to organize Oregon’s first public forum on graywater reuse. Recode invited architects, builders, and advocates from the Portland community to discuss their desire for graywater reuse and their values around water. From that forum two groups mobilized, one that focused on graywater reuse for indoor  reuse for flushing toilets (after treatment) and one that focused on outdoor reuse to taking advantage of graywater for fertigating orchards and plants. A small group, including then co-chair of the Oregon State Plumbing Board, Jon Gray, advocated to create an Oregon Statewide Alternate Method to allow for indoor use of rainwater and interior reuse of graywater within the plumbing code. The second group formed a legislative team on outdoor graywater reuse co-chaired by Recode co-founder Brenna Bell.

HB2080 legalized the reuse or graywater for outdoor reuse, but specific codes needed to be created to outline how graywater reuse would be permitted and overseen by DEQ, which oversees where water goes once it leaves buildings. A DEQ graywater advisory committee met for several years to create recommendations on how to permit graywater systems. The committee was composed of an environmental activist, a landscape architect, architect, and agency staff from health, building and wastewater programs. Recode volunteers Melora Golden and David Osborn created educational materials for that committee during the decision making process, including a video showing pre-legal graywater installations around the state. Recode also organized people to provide public comment at every meeting of the Advisory Committee and provide comment on the draft graywater rules.

This permit program is statewide, unlike Washington State’s graywater program, which must be adopted at the county level. Applicants submit a new permit application to the Oregon DEQ, pay an application fee and then pay an annual fee after that.

One of the larger upcoming projects is Parkmerced in San Francisco. The project is a renovation and expansion of a World War II era subdivision. The 152-acre site will be retrofitted and expanded to reuse graywater for indoor and outdoor uses. The project is following San Francisco’s Non-potable Water Ordinance that requires as of November 2015 all new buildings over 250,000 square feet in San Francisco to treat all wastewater onsite and use available alternative water sources for toilet and urinal flushing and irrigation.

Jackson County has had more educational activities promoting graywater reuse and had several local champions promoting the practice and doing installations. In the spring of 2012 Recode did a presentation about barriers and opportunities for ecological sanitation in Oregon and informed the 20 plus attendees about the upcoming graywater permit pathway. On June 23, 2012 after the graywater permit process was released the Ashland Conservation Commission, in coordination with the City’s Building Safety Division and ECOS of Southern Oregon University presented and hosted an informational gray water re-use event for the general public. One resident noted attendance as “sleepy,” however those who attended got information about installing both residential and commercial systems. In 2013, Ashlander and aquatic ecologist, Malena Marvin did graywater 101 talks and DIY workshops on laundry to landscape installations. Marvin took graywater installation courses with Graywater Action in California. Marvin installed several of the Ashland graywater systems. In 2013, the Southern Oregon Mail Tribune noted that Marvin did local Laundry to Landscape installations for about six hundred dollars. Marvin left Ashland in 2014, but graywater installations in the area have continued to grow year by year.

In Rogue River there is one accessory dwelling unit with a permitted graywater reuse system on a site with a single family residential house.  The system diverts bathroom and kitchenette sink water to the graywater system. The three way valve allows the user to divert water to either the septic system or a mulch basin surrounded by natives and perennial plants. The owner noted that the county was very agreeable and easy to work with. They worked with local plumber Mat Tibbits in Grants Pass.

Almost all of the graywater permits in Oregon under the DEQ’s program are part of single-family residential houses.  One homeowner purchased a manufactured system, the Matala Aqua2use graywater system ($430) and has been happy with how it works. The homeowner saw their contractor’s graywater installation in Ashland and that helped them decide to have their own installaion. Their system waters two trees.  They paid a plumber and someone else to do a bit of excavating for the outlets, which they remember costing about $150. Once a season the owner rinses out the plastic filters.

Another homeowner did a laundry to landscape system using a mulch basin to filter the graywater instead of a plastic filter, which has required no maintenance since it was installed. The low cost system was installed in 2013 and the woodchips in the mulch basin have not had to be replaced yet. The washing machine pumps the used water across the driveway to five outlets that discharge into a line of mulch basins next to a hedge of lilacs.  The homeowner remarked that the most important thing is for clear signage on the three-way valve next to the washing machine so that users control when water empties to the sewer and when to the plants.

On the more expensive end, the Desert Rain residential house in Bend, Oregon has the only tier 2 permitted graywater system in Oregon. The tier 2 permit requires treatment of the graywater so it can be safely stored before reuse (graywater stored without treatment goes funky fast). The graywater on site is collected into a 1,500 gallon pre-treatment tank where solids settle to the bottom, then processed through a constructed wetland on site where plants devour the nutrients, then held in a 1,000 gallon holding tank, and then pumped into a 5,000 gallon storage tank where it can be used for a water feature and irrigation. Whole Water Systems, environmental engineering consultants based in Seattle, designed the constructed wetland system.

The Water Reuse Urban Taskforce in 2003, created a list of existing or scheduled water reuse projects underway in urban areas through out Oregon. The group looked at water reuse of any kind, not just graywater.

Precedents Outside of Oregon

The Bullitt Center in Seattle, WA uses a constructed wetland on the roof to treat water from sinks and showers, cleaned graywater is infiltrated into the soil in the public right of way next to the building.

Homeowners with laundry to landscape systems remarked on how affordable the system was, while the manufactured systems range from a few hundred to thousands of dollars.

The Water Environment Research Federation has funded one long term study that provides evidence that graywater irrigation following latest practices does not pose any major risks to plants except three salt-sensitive tree species (avocado, lemon, and scotch pine) (WERF 2012). WERF is continuing to fund research on the long-term safety of soils irrigated with graywater. The concern about salts getting into soil can be ameliorated if users avoid cleaning products with salts like powdered machine dishwasher detergent.

In 2003 when Oregon began looking at graywater reuse only Arizona and California had permit pathways, now about 19 states have some type of permit pathway for graywater reuse and cities like San Francisco require larger buildings to use alternative water sources like graywater for nonpotable purposes like flushing toilets and irrigation.

Initiative to pursue legalization of outdoor graywater reuse in 2007 and 2008 was made possible by volunteers across many organizations including Recode, Central City Concern, Jon Gray, Sera Architects, etc. 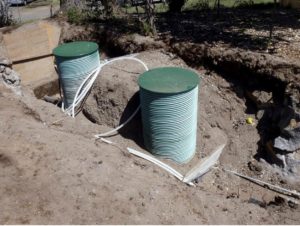