The town of Falmouth, Massachusetts near Cape Cod, authorized funding for a pilot project to evaluate the efficacy, installation cost and public acceptance of both composting and urine-diverting toilets (called Eco-toilet Demonstration Program).  Homeowners were given rebates and other incentives (called the Falmouth Eco-Toilet Incentive Program) to encourage them to use eco-toilets.  Massachusetts is the first state to give a variance to allow urine-diverting fixtures and site-built composting toilets, which do not have ‘product acceptance’ in Massachusetts

Falmouth is home to about 32,000 people on the southwest tip of Cape Cod. The area has sandy soils and abundant coastal estuaries, many of which are polluted by nitrogen from residential septic systems. Infiltrating septic tanks are the source of 60-90% of the nitrogen draining back out to groundwater, traveling in and out of estuaries causing algae blooms and other aquatic problems.

To meet the total maximum daily loads (TMDLs) for nitrogen mandated by the Massachusetts Department of Environmental Protection (Mass DEP), the Falmouth Water Quality Management committee developed this incentive to determine how effective ecotoilets could be at reducing household nitrogen output.  Previous research, mostly in other countries, has shown that composting toilets can cut nitrogen release from 82-96%. The program offers a five thousand dollar rebate, plus the cost of a septic tank pump-out to homeowners who will retrofit all of their toilets to be eco-toilets. Homeowners are responsible for the environmental impacts of their ecotoilets.  Notices are registered on the deeds of each property with ecotoilets to alert new homeowners of their responsibility when ownership changes.

The town was required in 2012 to create a comprehensive management plan for meeting the total maximum daily loads (TMDLs) for nitrogen mandated by the Massachusetts Department of Environmental Protection (Mass DEP). Part of this plan includes expanding Falmouth’s sewer district. Based on community interest in alternatives to sewer systems $500,000 was set aside to create a Falmouth Eco Toilet Incentive Program to determine how much nitrogen eco-toilets (composting and urine diverting toilets) can remove from the total household wastewater that enters sewers and septic systems. The program’s goal is to determine how useful these fixtures are in reaching the town’s TMDL goal for nitrogen.

Homeowners who participate in the voluntary program receive a $5,000 rebate for the permitting, purchase, and installation of eco-toilets to replace all the existing toilets in their home; in addition, they receive a free septic tank pump-out (a $300 value). In exchange, the eco-toilet owner must allow regular testing of their septic system by the Barnstable County Department of Health and Environment for up to one year. The goal of the program is to determine an appropriate nitrogen-removal credit for homeowners or businesses with eco-toilets. A separate incentive was provided by a Betterment Exemption Program, to give property owners in the Little Pond Sewer Service the opportunity to avoid paying a betterment estimated at approximately $17,000 in exchange for retrofitting their homes with eco-toilets.

Massachusetts code requires product acceptance for all plumbing fixtures which means documentation of 3rd party testing performed in the United States usually resulting in a listing by United Laboratories (UL listing). The urine diverting composting toilets and site built composting toilets did not have ”product acceptance”. To establish approved compliance for the ecotoilets to be installed, Sia Karplus, the project’s technical director, submitted an eighty page written report and oral presentation to the Massachusetts State Plumbing Board. Permission was given for the Barnstable County Department of Health and Environment to be the responsible entity for up to forty installations in lieu of product acceptance, with Sia Karplus being the project lead. To date nine households have participated in the pilot project, and approved to install ecotoilets.

Urine diverting toilets, divert urine alone from the wastewater leaving residences. In this project urine was diverted to storage containers or to composting toilets. Often the toilet bowl has two chambers, which divert the urine.  Urine is virtually sterile and makes up less than 0.5% of household wastewater yet contains 80% of the nitrogen, 50% of the phosphorus and 60% of the potassium excreted by people every year (Johansson 2000, Tettey-Lowor n. y.).  To read more about urine diverting toilets look at SSWM’s description.

The cost and practicality of retrofitting existing structures with eco-toilets is important to understand whether these toilets are a viable alternative to more traditional wastewater management techniques. The $5,000 rebate for permitting, purchase and installation of ecotoilets turned out to be enough to cover one toilet most of the time (see table for 2 examples where the installation cost were above $5,000), but not enough for households who needed to retrofit multiple bathrooms.

Table: Summary of the Nine Household Eco-Toilet Installations Installed as of end of 2015 (note interim report from 2015 only reports on the first five).

The Town of Falmouth conducted testing of the combined household wastewater in the septic tank before and after installation for the first year of the project to determine the impact the eco-toilets had on household nitrogen output. They did not analyze the nitrogen content of the diverted urine or composting material because it was assumed that if composting toilets became widely used, the material would need to be transported to a regional processing facility rather than disposed of on-site.

Households using ecotoilets had lower nitrogen in their combined wastewater because the ecotoilets directed toilet waste to separate containers, namely urine was diverted to urine holding tanks and toilet waste to composting vaults. The interim report shows that composting toilets reduce household nitrogen output from septic tanks considerably from 82-96% and can meet user expectations, though some had issues with gnats and liquid management.

The five households studied so far suggest that 50-150 gallons of leachate per year will not evaporate during the composting process (some leachate is reused to re-wet the pile or evaporates with the ventilation fan). Under current Massachusetts rules “the only acceptable management of the liquid residual from composting toilets appears to be removal by a licensed septage hauler and disposal at a wastewater treatment facility” (Barnstable County 7).

The urine diverting-only flush toilet (i.e. urine goes to storage tank, feces and toilet paper goes to the septic tank) was expected to reduce household nitrogen output by 80%– if all urine was successfully diverted.  There was only one household that chose this option. There was a 55% reduction in nitrogen load from the dwelling (with 2.4 occupants), comparable in nitrogen reduction to a conventional septic system. It is hypothesized that the urine diverting toilet throne did not successfully divert all urine.

Under Massachusetts regulations the dry composting material is allowed to be buried under six inches of cover in a house’s backyard by the toilet owner. The liquid leachate on the other hand, must be transported by a licensed septage hauler or diverted to a septic system. Neither of these options is desirable when nutrient reduction is required for the watershed, since both of these strategies release nitrogen in to the groundwater in amounts that may exceed the limit necessary to protect natural resources. A sample of leachate from the composting toilets was sent to Mark Hutchinson at the University of Maine School of Composting to determine whether the residual liquid could be used in conjunction with a compost feedstock to create a usable soil amendment through thermophilic composting. Experiments concluded that the compost leachate would not support the thermophilic composting process needed to render pathogens harmless.

The goal was to test 62 installations, to date there is a report on the first 5 installations and no residents have applied for the Betterment Easement exemption inside the Town of Falmouth (i.e. the current eco-toilet installations have not been in the area required to sewer up). “Despite providing a well-advertised $5,000 incentive to any property owner in Falmouth, as well as an opportunity to be exempted from an estimated $17,000 betterment (mailings were sent to every property owner in the Little Pond Sewer Service Area) participation in the program has been limited.” (Barnstable County 3).  Those interested in replicating this initiative should contact Sia Karplus or the Cape Cod Ecotoilet Center.

Money was already being set aside to plan for the sewer system, a fraction was set aside ($500,000) to create a Falmouth Eco Toilet Incentive Program. The reporting on the first five installations were funded by the Town of Falmouth with additional funds for analyses and reporting regarding residual products and contributions by staff at the University Of Maine School Of Composting were funded using Section 319(b) funds. 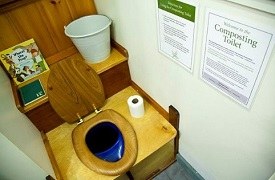