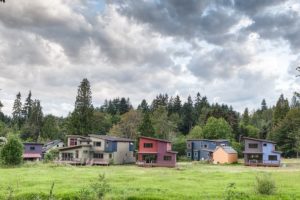 A decade before the Washington State Dept. of Ecology made low-impact development (LID) the “preferred and commonly used method” for on-site stormwater management, Clearwater Commons LLC took advantage of a voluntary LID compliance path pioneered by Snohomish County from 2000 – 2005.  In 2006, this tight-knit group of families embarked on a 6-year journey to design and permit their intentionally eco-friendly neighborhood, located on an ecologically sensitive site with wetlands and North Creek a salmon-bearing stream, using multiple techniques in combination for a net-positive result.

By taking a comprehensive approach – using permeable pavers and porous concrete, narrow road widths, minimum excavation “pin” foundations, raingardens in the right-of-way, and stream restoration – they went beyond low-impact to make a positive impact for water quality, wildlife and the environment.  By taking the optional LID compliance path and an integrated, comprehensive approach to infiltrate all stormwater on-site, they eliminated a stormwater detention pond and other traditional “grey” infrastructure drainage. This gain in buildable land, combined with a zoning change to high density residential, allowed them to add 7 housing units to their cohousing community previously platted for only 9 units – yielding a significant increase in the asset value of their development (added 2-4 units by LID-elimination of detention pond).

Yet, for each innovation that deviated from standard development code and approved engineering designs, their plans had to go through various modifications with multiple agencies.  Each had to be reviewed by regulators, corrected by the design team sometimes through multiple iterations, in order to be approved by an internal deviations committee (Snohomish County) or other officials. Everyone had a steep learning curve, which added more than a year and significant cost to the permitting process.  Not to be deterred, applicants and regulators worked together through all the issues to put the project vision into action – and celebrateed their grand opening on April 21, 2012 during the NW EcoBuilding Guild’s NW Green Home Tour!

Several deviations were associated with the required road and frontage improvements along the neighborhood’s main access road and right-of-way on 194th Street SE.  At first they wanted to limit the width of the access road to 18 feet, and modify frontage improvements to prevent any intrusion into the adjacent wetland. They argued a narrower road would calm traffic – citing examples from other cities where narrower roads were compatible with fire and life safety concerns.  They said it would protect the wetland and water quality, and save the need for a costly Army Corps of Engineers wetland permit.

The County Road Engineer was willing, but the Fire Marshall rejected their request based on Fire Code minimums.  In the end, a 20 foot road with 1’ gravel shoulders was approved; which standards would normally require to be 27 feet wide.  The county also approved elimination of a planter strip usually required between the curb and sidewalk – where the wetland pinched the road. They also signed off on a modified porous sidewalk design with addition of understorage capacity and composted soil, as well as a rain garden in the right-of-way planting strip.  Through soil analysis, flow modeling and careful design they showed the combination of features would be capable to infiltrate and provide treatment for stormwater flows from the entire roadway.

The project team also asked for a deviation to reduce the width of the emergency access road through the development from the required 20 feet, to 8 feet paved plus 2 foot gravel shoulders on each side (12’ total), with a “hammerhead” turnaround for emergency vehicles.  They argued this would be adequate for fire vehicle access since no cars will park along this section of road which is pedestrian access only, but their request was denied by the Fire Marshall [or District].  The fire access road was built to minimum 20’ using a pervious plastic geogrid system.

The community is built along North Creek, which provides habitat for spawning fall-run Chinook Salmon, Bull Trout – both listed species under the Endangered Species Act.  Habitat management rules require a 150 foot buffer from ordinary high-water mark, and prohibit impervious surface within 300 feet of listed salmon-bearing waters. With three delineated wetlands on site totaling 2.24 acres, buffers of 1.65 acres, and the creek with its riparian set-backs of 1.16 acres, this left 2.4 acres of buildable land outside the critical areas and buffers.

To minimize the impact of this developed portion of the property, they tilled compost into the soil over 53% of the area to a depth of 12 inches.  Using an alternative modeling method approved by the County, they were able to show 100% infiltration of on-site stormwater flow.

Instead of garages for every home, they made the only road to the homes a pedestrian-only, pervious path which doubles as emergency access road. For most purposes, residents must walk the short distance from parking lot to home, fostering healthy active lifestyles and a neighborly community, while making environmental stewardship an integral part of residents’ daily life. 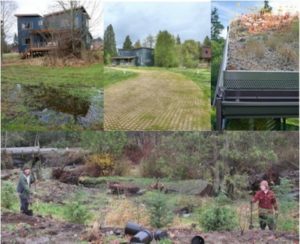 Distributed raingardens and a pervious pavement parking lot provide additional infiltration of stormwater.  These techniques were combined to eliminate the need for any discharge to North Creek, by mimicking the pre-development forested condition of the site.

They went beyond strict adherence to environmental rules to ensure their project would be found to not only have “no significant impact” (per State Environmental Policy Act). Their values and commitment were to have a positive impact on the site’s ecosystem, compared to its previous seriously degraded condition. The required Critical Area Mitigation and Enhancement plan was designed to “result in a net improvement in functions and values of the wetland and its buffer impact.” This included:

Clearwater Commons was developed as an airspace condominium and model low-impact development project. The Group’s goal is to provide a pedestrian-friendly community with shared on-site amenities.  By clustering some units into duplexes they were able to minimize development impacts on the environment, work within a constrained land area, and meanwhile restore the functions and value of wetlands and stream buffers on the property.

To achieve this, they used Snohomish County’s first-of-a-kind voluntary LID compliance path, through which they applied for and received multiple deviations from County and State development codes and design standards. This required nine permits from six agencies, with deviations including:

Owner and developer Tom Campbell commented only partly in jest, that ”with the number of deviations we had from the standards – we were clearly deviants, a fact that I’d be proud of if it didn’t hurt us in the pocket book.”

By combining these innovative approaches into a comprehensive solution, they eliminated the need for a stormwater detention pond and other traditional “grey” infrastructure drainage. This freed up land, combined with a rezone to high density urban residential allowed them to add 7 buildable lots to their cohousing community previously platted for only 9 lots on 7.5 acres (up to 4 units directly attributable to elimination of stormwater detention). There is a strong business case to be made for low, no, or positive impact use of LID practices to increase asset value, natural values, and market appeal, while reducing costs of stormwater flow-control and treatment. The downside for Clearwater Commons was spending 2/3rds as much on site design, engineering, analysis, and permitting as they did on the actual site infrastructure itself.

As an early adopter Snohomish County helped organize the first low-impact development conference in 2000, and worked hard to establish a process that would give guidance to LID efforts including Clearwater Commons’.  Yet it took years of trial and experience, including five earlier “reduced discharge demonstration” projects, for them to establish an effective streamlined process to make it go smoother. To succeed, the owner-developer, design team and residents had to tenaciously pursue their goal, in the process overcoming numerous obstacles, delays, and costs but with determination created a model from which other developers can adapt to go beyond “low-impact.”

We need to learn from the current LID experiments and make it easier to apply the strategies in an integrated way on more projects.  LID can be more effective if it is adapted to the conditions of the site, and linked directly to wetland and watershed restoration efforts.