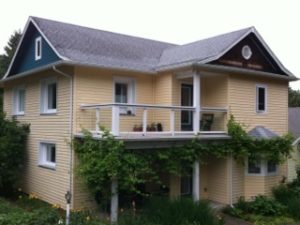 To futurefit our home (remodel for the future) to the Passive House Standard, we air sealed to reduce air leakage by a factor of 5.  Without this “accidental ventilation” we needed to add balanced, mechanical ventilation with heat recovery.  At the time, no UL-listed heat recovery ventilator (HRV) was available with the necessary combination of 75%+ effective heat transfer and low electrical consumption.  The ZehnderAmerica CA 350 HRV was certified by the Passivhaus Institut (PHI) for superior performance, but it was not tested and listed by Underwriter’s Laboratory (UL).  The City of Portland allowed us to install it without UL listing as an alternate material through its Alternative Technology Advisory Committee (ATAC) process.  We enjoy superior ventilation, indoor air quality, and energy efficiency with our HRV.

The City of Portland sanctions the ATAC to review and potentially recommend environmentally-superior building technologies not clearly allowed by building codes.  If the applicant is successful, then ATAC recommends (in writing) approval by the building official deciding a building code appeal for the technology.  Please note that the BDS appeal approval was predicated on the ATAC’s recommendation.  For the underlying ATAC recommendation, see http://www.portlandoregon.gov/bds/48661?a=255008

We built our home in 1998, and at that time, it exceeded building code energy requirements.  However, by 2009, we had awakened to the threat of global warming and knew we should futurefit (remodel for the future) our home to the Passive House Standard.  Although our home was relatively air-tight (about 3.5 ACH), we knew we would need to be much tighter to meet the Passive House Standard (0.6 ACH). We knew we would need to add balanced, mechanical ventilation to remove moisture and replace contaminated air with fresh air. Ideally, that ventilation system would use very little electricity since it would operate 24/7 in the seasons when we don’t want to leave windows and doors open.  In addition, we wanted ventilation with heat recovery to avoid losing the heat in the exhaust air.

We found HRVs on the market, but most of them recovered little more than 60 to 70% of the heat in the air.  Many of them used so much electricity for their fan motors that they used more energy than they recovered. We learned that there are several brands of HRVs sold in Europe that combine low electrical consumption with high heat recovery.  In fact, the Passivhaus Institut certifies only HRVs that recover at least 75% of the heat in the exhaust air (with low electrical consumption). Zehnder, a Swiss company, established an American subsidiary, Zehnder America, to sell its PHI-certified HRV, but first we had to get permission to install it.  Thanks to the City of Portland’s accessible ATAC process, we succeeded in obtaining approval to install it.

Now, having reduced our air leakage to below 1.0 ACH, we enjoy the many benefits of living in a home with superior ventilation.

Heat recovery ventilation is first a “balanced” mechanical system with one fan pulling fresh air into the house and another fan exhausting an equal amount of stale air to the outdoors.  However, the technology has another feature which makes it superior to conventional systems:  heat is transferred from one airstream to another over a high-efficiency heat exchanger.  In winter, the HRV transfers heat from stale warm air being exhausted from the home, over to the fresh cold air being pulled from the outdoors – warming it before it is distributed through ducts to living areas.  Thus, most of the energy required to heat the air is conserved.  On the hottest summer days, the system adapts to provide comfort without air conditioning.  It brings in cool air at night and then during the day works in reverse to transfer heat from the incoming air to the cooler air being exhausted, acting as a “heat rejection ventilator.”

We worked closely with our general contractor, HVAC subcontractor, manufacturer’s representative, and multiple paid and volunteer ventilation experts to design, install, and test our ventilation system.

Zehnder America’s HRV is from twice to three times the cost of other HRVs on the market; however, those models lack its superior performance.  Given the potential that electricity may be more expensive in the future, Zehnder America’s equipment may pay for itself in a conventional payback period.  Regardless, it provides quiet, energy-efficient, superior ventilation without drafts, and healthy levels of indoor relative humidity.   We enjoy superb indoor air quality and comfort.

We learned not only how essential the City of Portland’s ATAC process was for approving innovative technology essential for high-performance buildings, but the importance of sharing information.