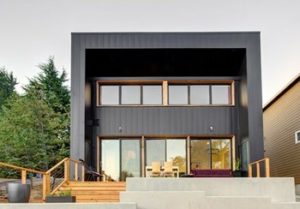 The Full Plane Passive House gives modern form and presence to the owner’s ecological and social values, while providing a playful environment for her son to grow and be educated in sustainable living in the City.  To meet net-zero water goals she combined stormwater catchment, graywater irrigation for her living landscape and composting toilets.  It all complied with Oregon’s statewide alternative water re-use plumbing rules adopted a decade before many other US Cities even considered it.

This project took full advantage of Oregon’s innovative policies regarding water collection and reuse to permit several complementary systems, through a mostly standard plan review process with the City of Portland with almost no issues.  The underground cistern for harvesting rainwater for potable use was the only element that required a City code appeal, using a standardized appeal process authorized by Statewide Alternative Measure 08-01 in 2008, and following clear specifications defined in 2008 Oregon Specialty Plumbing Code (OSPC) Appendix M.  The home’s graywater system, designed to reuse all wastewater from showers, sinks and dishwashing to irrigate an outdoor native garden, was approved by the City with the one requirement that they connect to city sewer for backup in case there was ever a problem with the distribution system. Composting toilets followed Oregon’s prescriptive rules in the 2008 OSPC allowing them as long as the model of toilet is an approved manufactured or site-designed toilet, tested and approved under National Sanitation Foundation (NSF) Standard 41.

The owner and design-build team for this home forged an ambitious collaboration to build a beautiful healthy home while going after the most rigorous green building standards in existence:

Other strategies include Indoor air quality, maintained with the use of a ductless mini-split system as well as a heat recovery ventilator. An open floor plan supports healthy air circulation. Strategic design provides ample natural daylight throughout the home, streaming through triple pane windows, taking advantage of solar gain in winter and natural shade and ventilation in summer.  The home is constructed with a double stud wall which creates a 12” wide space for dense pack cellulose insulation. The house produces more energy than it uses with a 5kw solar photovoltaic array.

Materials were chosen and utilized to minimize construction waste. Low or zero- VOC paints and zero-toxicity material finishes were used. FSC certified lumber and plywood was sourced by Sustainable Northwest Wood. The exterior siding is low maintenance. The ecological landscape design by The Figure Ground Studio and Fiddlehead, LLC represent regenerative intent to restore natural function to the urban environment. The site is located in a medium-dense neighborhood adjacent to bus routes and bike lanes.

This project was very unique based on the collaboration between the owner, architect, general contractor, landscape architect, and landscape contractor all being at the table from the beginning.  James Arnold, the owner of JRA, commented in a Portland Daily Journal of Commerce article “A little bit of extra planning really helps,” Arnold said. “Once we talk with the subs, the client, our Passive House consultants and everyone, we basically have a hologram of the project in mind and we can hit the ground running.”

James Arnold believes the Full Plane home demonstrates how deep green homes can be built at or below typical custom home costs. Premium costs for additional green building features can be offset by savings derived from an integrated design process and energy incentives.

The home’s water systems have had a few issues, some to be expected, some of them resolved, and others requiring significant retrofits in the hoped-for future.  For example, the gray water system from the kitchen sink was not equipped with a grease trap, and the irrigation system became clogged, requiring them to go back on City sewer until the issue is resolved. Another issue is the engineered siloxane sealant in the rainwater cistern has some small cracks, allowing some erosion of the concrete causing more particulate matter to enter the filtration system, requiring more frequent filter changes.  Because there is no first flush diverter on the rainwater system, impurities get into the cistern requiring periodic use of chlorine sanitation in addition to the UV sanitation.

Normal homeowner maintenance is higher than a traditional house, which was to be expected.  Leaf filters leading to the cistern must be cleared periodically, the cistern itself is cleaned out by scrubbing once per year in the summer, the carbon filters must be changed.  Replacing the UV sanitation bulb is expensive but happens rarely.