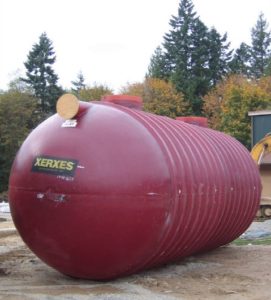 Washington Middle School installed a rainwater catchment system. There is a large fiberglass cistern in the ground used to collect rain water from the roof. This system uses the water from the cistern to flush toilets throughout the school. Although no permits were obtained for the school to install the system, the catchment system was installed as part of the Washington State Senate Bill 5509.

Olympia School District did not apply for a non-potable water reuse permit with the City of Olympia.  However, if they had applied for this permit, Chapter 16 of the Uniform Plumbing Code would have been what they would have to show compliance with.   Likely, they were allowed to install the rainwater catchment system without a permit under Washington Senate Bill 5509, which requires all state buildings of that size to meet LEED standards.

Instead of applying for a Non-Potable Reuse permit with the city of Olympia, they instead decided to pursue compliance through Washington Senate Bill 5509, which seems to have worked.

Washington Middle School was a pioneering project for green building in Washington State. It was the first public school built after Senate Bill 5509 was signed into law by Governor Christine Gregoire in 2005. The law states that any publicly funded building over 5,000 square feet must be built in accordance with current green building practices and meet LEED (Leadership in Energy and Environmental Design) standards.

Five years later, and Olympia School District is very happy with and proud of WMS rainwater harvesting system, which saves the school 300,000 gallons of water every year.  In the first few years a few technical problems arose, which were then quickly resolved by WMS staff.

Prominent in their plans to reduce their water footprint was their rainwater harvesting system, which collects water from the roofs of the newly built sections of the school and moves it to a 15,000 gallon cistern buried underground.  The water collected in the cistern is then filtered and used to flush toilets throughout the school.

When they were designing their new school, the involved parties at Washington Middle School knew that they wanted to reduce their schools water footprint.  To do this, WMS set out to accomplish three goals: