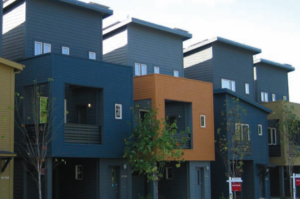 For this 5-unit entry-level, zero-net-energy subdivision in Washington County, Oregon, the builder used an innovative “Thermal Break Shear” (TBS) wall assembly with rigid foam insulation between the lumber framing and plywood sheathing in an otherwise conventional light-frame wall assembly. The Code Official required proof the proposed shear wall assembly would be capable to resist code level seismic forces, so the builder contracted with Oregon State University to perform destructive seismic testing, which demonstrated not only that the assembly complies with structural code, but surprisingly, TBS wall is significantly more resilient in an earthquake than a conventional wall.

Green One Construction, with support from ongoing research and development programs at the Oregon Department of Energy (ODOE) and Energy Trust of Oregon (ETO), built five net-zero energy homes in the Sage Green subdivision. Ben Walsh of Green One Construction led the project team, coordinating the efforts of the developer, subcontractors and R&D partners to meet the requirements of the Jurisdiction.  In the course of investigating a wall assembly with exterior foam insulation, the collaborative team innovated a simple, low-cost alternative with 1.25” of rigid foam between the lumber and ply sheathing. They realized this could deliver significant energy savings through a complete thermal break and airtight building envelope, while resolving other challenges in constructing a high performance assembly.

Of particular interest to anyone who might seek to use a TBS assembly, on June 1, 2013, the International Code Council Evaluation Services (ICC-ES) published Evaluation Services Report 2586. Beginning in 2015, building regulators at the City of Portland have acknowledged that ICC-ESR 2586 establishes that a TBS wall assembly with up to 1” of foam meets requirements for lateral bracing under International Residential Code (IRC) Table 602.10.2, Method WSP, and confers prescriptive approval on such an assembly with no engineering required.

In support of Green One’s effort to develop the net-zero energy model for the homes, ODOE and the Energy Trust of Oregon initially suggested a high performance wall assembly with rigid foam sheathing added to the outside of the wall assembly to create a continuous thermal break. Yet, this method complicates numerous other related processes and is costly.

For example, adding rigid foam exterior to the otherwise conventional wall meant the foam would most likely be installed by the siding contractor after the walls were “tilted up” rather than being installed by the framer while the walls were still flat on the floor.  Building walls flat is a common practice that makes the process safer and more economical. Exterior foam was a complicated prospect with potential for mistakes and guaranteed higher cost.

In the course of working through challenges with exterior foam, the project team had a breakthrough idea of having the framer install 1.25” EPS foam board between the lumber frame and plywood sheathing  instead of on the outside, which resolved many of the problems with the earlier wall concept. In the builder’s own words, “I was just trying to get a thermal break into the wall assembly at the least cost. Having the framers put rigid foam between the frame and the ply looked like the quickest, simplest way: work is on flat walls, and it doesn’t disrupt established framing or other envelope practices.”

With this solution they could assemble the layers together on top of the framing, and then tip the wall up as a complete panel. Walsh notes  “The one exception is transference across floor lines: we had to use threaded rod and back-to-back hold-downs in the frame cavities instead of the typical flat strap on the outside.”

To prove that inserting foam between the framing and shear panel would not degrade the lateral capacities of the assembly, structural engineer Scott Nyseth was engaged to prepare structural calculations for the wall, who at the time worked for Miyamoto International.  For the system to work, Nyseth said sheathing would need to be nailed every 3” on the perimeter, rather than the standard 6”.  Then the team contracted with Dr. Rakesh Gupta at Oregon State University’s Knudsen Wood Engineering Laboratory in Corvallis to perform destructive testing of a series of wall panels of various foam thicknesses.  The Knudsen team performed ASTM-E72/CUREE-style cyclic lateral load testing (ie: commercial code standard), in conformance with ICC Evaluation Service Approval Criterion 130, on September 14, 2009

The Northwest Energy Efficiency Alliance Report #E16-296  includes a cost analysis comparing several different wall assemblies.  It concludes that “the 2×6 TBS wall assembly consistently offers better ‘bang for the buck’” as a strategy to improve thermal performance without disrupting framing contractors’ familiar construction process.  Compared to standard 2×6 framing, the 2×6 TBS Wall yields 32% lower heat loss (i.e. U-value) and 47% increase in insulative R-value.  These gains were achieved for about 65% less [incremental] cost than the exterior foam assembly which performs only slightly better that the TBS wall.  Labor to install the additional layer of foam added just $0.25 / square foot; and materials added $0.50 / square foot, adding up to an incremental cost increase of $1,200 per home.

Building the wall requires double the number of nails which increases heat loss by 2% compared to the exterior foam wall.  Yet because of the nails it also achieves greater airsealing of the assembly, stopping air leaks due to the slight compression of foam between the frame and sheathing.

According to the NEEA Report:  “In addition to the thermal efficiency gains in moving from a standard 2×6 code wall with R16.7 (effective) to the 2×8 TBS wall with R28.1 (effective), the assembly used at Sage Green also helped achieve a continuous air barrier, an average air exchange rate of 2.1 ACH50, and improved seismic resilience.”
IECC Compliance Options for Wood-Frame Wall Assemblies