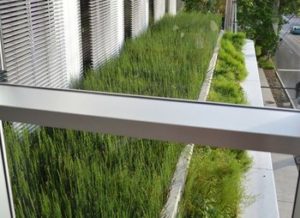 The Bullitt Center, arguably the greenest office building in the world, is certified by the International Living Future Institute having met the Living Building Challenge. The building is designed to capture and treat rainwater for all uses, and handle all wastewater on-site, including an innovative greywater treatment using a green roof constructed wetland and infiltration facility in the public right-of-way. Approval required multiple code waivers but the project was allowed extraordinary flexibility under the Seattle’s Living Building Pilot Ordinance.

To meet the “net-zero water” requirement of the Living Building Challenge – the world’s most rigorous green building certification – the Bullitt Center designers had to devise a system to ensure that 100% of storm water and building water discharge would be managed onsite.  Greywater in the building from sinks, showers, floor drains, and dishwashers is now treated in a living roof / constructed wetland, and any overflow is infiltrated into the ground through a green planter strip drainfield in the 15th Ave. right-of-way.  To gain approval, the greywater system was permitted as an On-site Sewage System (OSS) by the Washington State Department of Health’s Office of Shellfish and Water Protection (WSDOH) through an agreement with the local Environmental Health Services Division of Public Health Seattle and King County (PHSKC). Indoor plumbing components were reviewed and inspected by PHSKC under 2009 Uniform Plumbing Code, WA State Amendments, Ch. 16, Part II.

Greywater from the building is screened and collected in a 500-gallon stainless steel tank in the basement. From that tank, greywater is pumped up to a subsurface flow recirculating gravel filter system (constructed wetland) located in a green roof area visible from the 3rd floor office space. A new dose of greywater is pumped up to the gravel filter every 2 hours when greywater is present. The greywater is recirculated within the gravel filter every 30 minutes. When the treated greywater reaches a certain elevation, it flows through a screened pipe inlet and flows by gravity down to a modified drainfield area within the planter strip in the 15th Ave. Right-of-Way (see related case study Private Water and Pedestrian Flow in the Public Right of Way, McGilvra Park Seattle, forthcoming).

The treated greywater is distributed throughout the planter strip through shallow drip irrigation piping where it is absorbed by native plants. Any excess treated greywater not absorbed by the plants filters through a compost amended soil section, and into a gravel section where it will infiltrate into the native soils below.  The right-of-way section along 15th Ave also infiltrates excess stormwater not captured by the rainwater harvesting system, to mimic the undeveloped (forested) hydrology of the site.  Any excess water not infiltrated in the 15th Street drainfield will discharge to the City’s separated stormwater main.

Greywater flows from the building’s sinks, showers, floor drains, and dishwashers was estimated to be 345 gallons per day, well within the threshold for local permitting through PHSKC (<3,500gpd).  However, they knew it would require multiple code waivers to meet the Living Building Challenge requirement to treat 100% of greywater and stormwater on such a small urban lot, given the prescriptive nature of the current regulations for on-site sewage systems. So the local jurisdiction environmental health officer asked his counterpart at the Washington State Department of Health (WSDOH) to review the greywater treatment components including the recirculating gravel filter system (green roof constructed wetland) and drainfield (irrigation/infiltration area).

In a unique agreement to share regulatory the WSDOH accepted responsibility to review, inspect and permit the system. All indoor plumbing components were permitted through PHSKC in accordance with the local plumbing code (2009 UPC). Although the Living Building Pilot Ordinance technically does not apply to the State health department, it was Seattle’s initiative under the ordinance which secured the agreement for WSDOH to review and approve multiple rule waivers to allow the greywater system as an Onsite Sewage System, including:

The following additional code innovations are combined with the greywater system to achieve the Living Building Challenge “net-zero” water imperative.

Backed by its mission to protect the Pacific Northwest’s natural environment and promote healthy and sustainable ecosystems, the Bullitt Foundation wanted their new headquarters to be built to the highest level of sustainability. They also wanted the building to be a demonstration project that would set a new standard for developers, architects, engineers and contractors. The rigorous performance standard set forth by the Living Building Challenge was the perfect tool to demonstrate not just “sustainable” but restorative urban development.

The Bullitt Center is a 52,000 square foot, six-story commercial office building in the Capitol Hill neighborhood of Seattle, WA. The Center is home to a number of commercial office tenants who are successfully operating their businesses, while working in a net-positive energy environment. The Bullitt Center aims to advance the awareness and adoption of high-performance building through ongoing educational efforts, and by demonstrating that performance-based design works in a market-rate commercial project.

The Center is powered by a 244 kW rooftop solar array, composed of 575 PV panels. All rainwater that falls on the site is collected in a cistern in the basement, treated to potable drinking standards, and supplies all water needs of the building. The building is a type-IV heavy timber structure, made of Forest Stewardship Council (FSC) certified glulam beams and dimensional lumber (see related case study on Bullitt’s Mass Timber structure). The building sits atop a ground-source heat exchange system made up of 26 wells, each reaching a depth 400 feet. All materials used in the building were screened for compliance with the Materials Red List to restrict toxic chemicals. The wide variety of performance-based attributes are shared with the public through an ongoing tour program, a public exhibition space, and a number of research projects all managed by the University of Washington’s Integrated Design Lab.