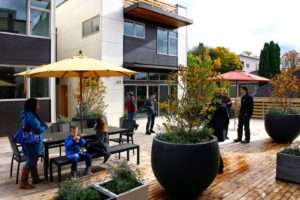 Marion Green Courtyard Townhomes is a new form of urban townhouse that utilizes a structured lid built over the top of surface parking, creating a pedestrian entry courtyard shared by all of the housing units. This new archetype mitigates the aesthetic impacts of parking areas, increases usable open space, and facilitates chance interaction to help build familiarity and community among neighbors. Gaining approval for this approach was a 7-year effort including lobbying for changes to the zoning code, then working with city agencies to resolve code compliance issues associated with the new building archetype.

A typical townhouse development includes at least one parking space per housing unit.  For project sites without alley access, the most common result is a parking court in the center of the site that uses up most of the open space.  In 2011 Seattle adopted changes to the zoning code that allowed for the construction of a courtyard lid over the driveway and parking areas in order to suppress the visual impact of parking and increase useable open space. Specific provisions in the code are used to exempt the courtyard lid from development standards that would otherwise prohibit it. Streamlined Design Review is used to obtain adjustments to development standards that reduce setbacks and enlarge the courtyard.  A fire department memo and building code alternates are used to simplify the configuration of firewalls, sprinkler, alarm systems and construction of the courtyard lid.

Seattle has more or less run out of single-family zoned land. Originally developed as a city of single family homes, Seattle must build its new housing in a more urbanized form. Currently the city is searching for ways absorb density without sacrificing neighborhood character and livability.  In particular, Seattle has struggled to develop multi-family alternatives to the single-family home.

Marion Green is an entirely new approach to urban multi-family housing. This new housing type creates a community center for all the residents to share, mitigates the visual impact of parking, facilitates interaction between neighbors, and increases access to open space and natural light. Some notable features:

Marion Green was completed in October 2014.  It was the culmination of over seven years of work; first to lobby for changes to the zoning code (see http://coranw.blogspot.com/) that would allow it, then to partner with city agencies to work through the building code compliance issues that come along with pioneering a new building archetype.  The project generated enormous interest, selling out before the project was completed. Now that the road has been paved, the idea is beginning to take hold.  with several similar projects now built or currently in development in Seattle.

From 1989-2011 Seattle built thousands of townhouse units in a format known as the 4-pack – a dense grouping of townhouses organized around an auto-court.  Seattle’s dissatisfaction with this type of development led to the 2011 multi-family code, a liberalization that was motivated in large part to allow builders to come up with better alternatives for dense urban housing. Our goal in developing Marion Green was to build a better mousetrap; provide a replicable model of a better way to do infill housing in Seattle, and I truly believe we’ve done that.  We’ve found a way to hide the cars, create more open space, break down project scale, bring more natural light into the homes, and most importantly, provide a commons that helps facilitate and build community among the families that share this little plot of land.  Marion Green is not a unicorn.  Other people have started to pick up on this model.  As of early 2016 there are now four other courtyard lid projects in the works (two by our office, two by other architect/developer teams).

Seattle’s 2011 multi-family code features flexible design standards as well as a streamlined design review process that allows applicants to make additional departures from some development standards.  This change to the regulatory environment made it possible to build a project like Marion Green. The project is similar in layout to a conventional auto-court townhome except that a) the front and rear building clusters are moved farther apart, and b) the driveway and parking area is covered by a useable courtyard lid. Specific provisions in the land use code exempt the courtyard lid from counting toward FAR and facade length development standards that would otherwise penalize the project.  Code modifications allow for the fire walls between the units to terminate below the courtyard lid. The lid over the parking area bumped the project from the Seattle Residential C ode(SRC) into the Seattle Building Code (SBC), which involves additional sprinkler and fire alarm requirements.A memo from the fire department allowed for a simplified sprinkler and alarm system similar to that for a residential townhome structure.

The courtyard lid is move expensive to build than a conventional auto-court townhouse. The cost of the structure, the railings, stairways, and the terrace deck itself added about $100,000 to the cost of the project.  In addition, the lid bumped the project SRCinto the SBC, which triggered a host of small but not insignificant expenses.  All told, the courtyard added to a $160,000 premium to the project costs, or about $20/sf.  Aside from the intangible benefits of having better open space and more desirable living environment, the project sold for about $50/sf more than comparable new townhouses in the same area, improving the bottom line for the development team.

Since Marion Green was constructed, the model has continued to evolve.  Our latest projects have been allowed to provide unenclosed parking under the courtyard lid in addition to the enclosed garage, although these understandings continue to be reviewed on a case-by-case basis.