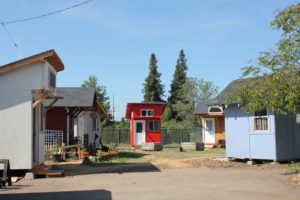 Following the eviction of a tent encampment during the 2011 “Occupy” Movement, the City of Eugene created the “Opportunity Eugene Community Task Force on Homeless Solutions” tasked with identifying “new and innovative solutions” for responding to the issue of homelessness. Based on the committee’s recommendation, City Council directed staff to establish a process and identify potential sites for a “pilot project for a low-cost, micro-housing project for homeless individuals.” An underutilized city-owned site was selected, located in an industrial area but close to a bus line and services.  A conditional use permit for a “homeless shelter” was approved at a public hearing with no opposition, and building commenced in August 2013. Initially approved as a 1-year pilot project, the lease has since been renewed twice with unanimous support from the City Council, and is currently approved through June 2018.

Clearly meant to be “temporary structures” (and able to be moved), the bungalows were still required to meet code requirements for structural strength, fire safety, means of egress, and ventilation, as defined in ORSC Section 107.  Once they complied with those requirements, the City allowed a great deal of flexibility to help keep costs to a minimum.

Opportunity Village Eugene was approved as a “homeless shelter” land use, which required a conditional use permit for the light industrial zoning of the site (Eugene land use code only permits homeless shelters in industrial or mixed use employment zones). 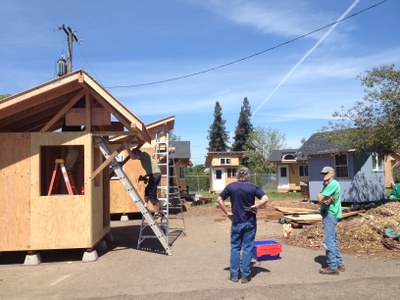 The City of Eugene decided to take a hands-on creative approach and actively help the project designers realize their vision while meeting all applicable building codes.  They interpreted the tiny homes to be “temporary structures” regulated under ORSC Section 107, and as “sleeping units” rather than “dwelling units” recognizing they would be served by a central cooking, restroom, and gathering facilities. If they had looked at each unit as a permanent dwelling, construction would have had to meet much higher standard. For example, Sec. 107 does not require temporary structures to meet standards of durability i.e. secure anchorage.

As a result, they were not required to hook each unit up to water and electricity. With no available electricity, each bungalow was allowed to be built without heating or indoor light (residents use solar lighting kits and common facilities have heat).

Furthermore,  traditional foundation requirements were relaxed since the risk associated with a structure not connected to utilities was negligible. So the temporary structures were built on pier pads rather than permanent foundations. Engineering calculations were produced which showed an earthquake or wind event might move the house slightly but would not hazard its structural collapse.

The common facilities on the other hand, did meet all structural, fire and sanitation codes, and included plumbing and electrical utilities. They were similarly placed on pier pad foundations, however helical anchors were used to secure them to the ground.

Sec. 107 also does not require temporary structures to meet energy efficiency codes, so the buildings were not required to meet typical insulation requirements. The structures are still insulated, but do not meet code standards, which are set with much larger homes in mind.

Building officials referenced a state statute that allows for transitional housing campgrounds (ORS 446.265), as a guideline for requiring setbacks between the structures. They required 10 feet between buildings, similar to the spacing required between camp sites in a campground. 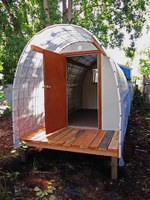 Each structure is composed of a kit of modular, pre-manufactured panels, constructed in an off-site workshop. The panels utilize standard dimensions of lumber and plywood, which reduces waste, simplifies the construction, and makes donation of materials easier. Once a few panel kits were complete, they were transported to the site to be assembled by teams of volunteers, skilled builders, and the residents themselves, rather than having to use a licensed contractor. The village was built incrementally over the course of nine months. Utilizing volunteer labor and donated supplies kept the cost for the whole project under $100,000, funded by private cash donations.

The City of Eugene also has a unique provision that allows for the construction of “conestoga huts,” which are interpreted as “hard-sided tents” under a Permitted Overnight Sleeping ordinance (EC 4.816).  These 6 by 10 foot shelters can be built by teams of volunteers and a few hundred dollars in materials. They include an insulated floor, insulated walls in the front and back, and a wire frame arched roof covered with insulation and outdoor vinyl that is attached to the base of the structure. The above mentioned municipal ordinance exempts the huts from code requirements.  Click to read more about this type of shelter.

The Occupy camp and the Opportunity Eugene Task Force catalyzed significant public concern around finding more productive solutions than simply relocating people without shelter. A recent “point in time count” found 1,473 homeless people in Lane County, of which 716 men, women, and children were without any shelter.  The Task Force’s recommendation prompted a community-drive response that underscored the need to build bridges of understanding, compassion and support between the housed and unhoused in the community.

The initial temporary nature of the site created a unique design challenge—to build a village of structures that could be relocated if necessary, while making them substantial and attractive enough that the project would have community support to endure.  Due to the limited duration of the pilot project, electrical and plumbing infrastructure was limited to the common facilities rather than each individual unit, similar to Portland’s Dignity Village. Consolidating utility hook-ups helped to significantly reduce permitting complexities and expenses.

Rather than following a traditional development process OVE partnered with residents, volunteers, and skilled builders who worked together to develop the village incrementally.  After receiving a key to the site in mid-August 2013, the first five structures were built in the first day, and the rest of the village was built over the course of nine months on a shoestring budget.  During the first “big build” event, volunteers and residents also built ten raised garden beds, and dug a 200 foot long, two foot deep trench to run water and electricity to the site where the kitchen and bathroom facility would eventually stand.  About a dozen of the first residents moved in within the first few days, some staying in tents while they helped build their own shelters. This core group, selected by a committee of the nonprofit, had already been meeting bi-weekly in the months leading up to the opening. From there, new residents were brought in as the micro-housing was built, and integrated into various committees that operate and maintain the village. It took a couple more months to complete all of the common facilities, and by May 2014, the village was built —including micro-housing, a gathering yurt, common kitchen, front office, tool shed, and bathhouse with flush toilets, a shower, and laundry room.

Low-income housing developments often cost $150,000 or more per unit, not including the cost of land land.  Because of extraordinary flexibility in building codes, all 30 of the little houses here costs less than one of those units, and it didn’t cost the taxpayers a dime. While housing conditions are not ideal, Opportunity Village ensures residents’ basic needs— stability, security, privacy, and the ability to stay warm and dry—are met; a vast improvement from being without any shelter.

Following the success of their first project, SquareOne Villages has since been able to pursue a second village. While Opportunity Village focuses on temporary, transitional housing in an effort to serve a larger population, Emerald Village will provide more attainable and sustainable places to transition to.

Each of the 22 homes are designed to meet the building codes definition of a “permanent dwelling”—including sleeping and living areas, a kitchenette, and bathroom—all in 160 – 288 square feet. The individual houses will be supported by common facilities that include a community gathering area, kitchen, laundry, restroom, tool storage, and office.

Unlike most affordable housing projects, residents of EVE will not simply be renters, but instead members of a housing cooperative with a share in ownership of the village—enabling them to create a modest asset that can be cashed out if and when they choose to leave. As part of this innovative model, SquareOne Villages will hold the property in trust to assure continued affordability to members of the cooperative into the future.

SquareOne Villages has purchased property for the project and plans to break ground in Fall 2016.