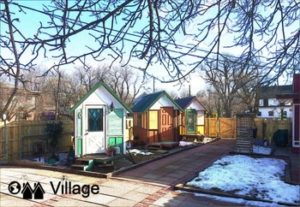 After discussions with city officials over potential options for the development of a tiny home village, Occupy Madison Inc. (OMI) decided that the most appropriate action to satisfy the desired goals of their project was to seek a zoning map amendment from Neighborhood Mixed-Use (NMX) to Planned Development (PD) zone. The PD zone explicitly encourages sustainable and/or ‘alternative’ building/design developments as long as the proposed land-use proves itself inappropriate for all other zone districts.

Their success gaining approval was largely due to the inherent flexibility of the PD zone as adopted and implemented by Madison.  The requirements for a zoning map amendment to a PD district are relatively straightforward. The code language outlines the standards and process for approval;  however, the unconventional nature of this project along with resistance from neighbors made the conditions for approval especially rigorous and energy intensive.

The tiny homes are built on wheeled trailers, so they are considered Recreational Vehicles (RVs) and so are not subject to standard building, plumbing, and electrical codes. The trailers are kept under 3,000 lbs gross weight  to avoid the need for title and registration (see standard for ‘Gross Weight Trailers’). While mobile/modular homes do require certain structural and utility standards, especially while on roads, the neighbors’ and the City’s safety and aesthetics concerns required OM Village to alter their initial plans.

Through an iterative and collaborative process that involved numerous public meetings between city officials, the East Emerson Neighborhood community, and advocates of OMI, agreements were made as to the final layout of the village, safety standards for the tiny homes, and other conditions on the village community.  Specific agreements were to abide by building code, fire and electrical safety standards, to preclude composting toilets and ‘alternative’ plumbing within the tiny homes, and to increase curbside appeal with raised garden beds and by shielding tiny homes from view.

Occupy Madison evolved from the Occupy Wall Street movement as a direct local response to the issue of homelessness in the Madison community. After a lengthy bout of confrontational disputes between Occupy Madison activists, the city of Madison leadership, and members of the larger community, in spring of 2013, Occupy Madison began building 98 sq ft. housing structures in an effort to provide immediate housing for homeless individuals. Their protest and the solution they proposed highlighted not only the lack of legal options for homeless individuals’ existence in both public and private places, but also the lack of response from city officials to do anything about it.

The first tiny home was a creation of OM Build, a branch of the organization that leased a workshop in June of 2013 to manufacture tiny homes for unhoused individuals. In order to sidestep regular building, electrical, and plumbing code requirements, OM Build opted to construct the homes on wheeled trailers rather than permanent foundations. Madison’s parking ordinance specifies that no “street storage” of a permitted vehicle is allowed to “remain standing upon a street in the city of Madison for a period of 48 consecutive hours or more,” making the wheeled tiny homes an unsustainable option without land/property to hold them.

In early 2014 OMI purchased the property at 304 N 3rd St., a former gas-station turned auto-repair garage, with the intention of converting it into a tiny home village. This village would include: up to 9 portable shelters (i.e. tiny homes), a workshop to continue fabrication of tiny homes and to allow residents to build retail products, retail and office space for OMI headquarters, a shared commons area with cooking facilities, bathrooms, showers and other residential amenities, raised bed gardens, etc. (a full list of permitted, conditional, and/or accessory uses within OMV’s Planned Development district can be found here under ‘Uses’).

The site was originally zoned Neighborhood Mixed-Use (NMX) which would have restricted OMI from 1) manufacturing additional tiny homes on site, and 2) implementing their desired “residential cooperative village” of tiny homes. Discussions with city staff convinced OMI that pursuing a zoning map amendment from NMX to a Planned Development (PD) District would “provide both the greatest degree of flexibility for all the [desired] uses, as well as the highest degree of regulatory structure to manage their proposed project” (see Planning Division Staff Report, page 3, Analysis).

The path to compliance for the project was a relatively straightforward public process. It was made increasingly demanding however, due to concerns and resistance from certain residents of the surrounding East Emerson Neighborhood. While the Planning Division Staff, Urban Design Commision, and Common Council ultimately ruled in favor of the appropriateness to which the OMV development fit within the larger Comprehensive Plan, persistent pushback from neighboring residents resulted in increased conditions and alterations to the final tiny homes/village design (See the full of “Changes in Response to Neighbors”). While none of these conditions or alterations posed any serious threat to the village plan as a whole, it does point to the necessity of maintaining good relations with the surrounding community and informing/involving them as early as possible. OMI is a perfect example of a group that did everything right in this regard; and when ongoing resistance from a few disgruntled neighbors arose and persisted, they handled it with unflappable patience and professionality, making compromises on certain trivial aspects of the design while defending the more foundational elements.

While these definitions and code requirements are explicitly intended only for the PD zone approved for use by OMV, they do present a potential standard the city could adopt on a larger scale if OMV continues to prove itself as a valid housing option/model (read this article in the Isthmus for context to this claim). This appears to be the city’s first attempt at articulating guidelines for a tiny home and tiny home community/village, which makes this project especially innovative for its region.

The 98 sq ft. tiny homes include: insulated windows and doors, metal roofing, siding made of re-purposed pallets and medium density overlay panels, cedar trim, and a wooden deck strategically placed between the entrance door and hitch. The roughly 6’ by 13’ interior comes fashioned with a bed with storage space above and below, a small kitchenette with a gravity fed sink conjoined with a toilet free powder room, a dining table with chairs, and an electric wall mounted heater. (View Final Approved Designs for both common area(s) and portable shelters).

The Occupy Wall Street protest in New York City (OWS) gave rise to local protests in hundreds of communities (600+) across the US, of which Occupy Madison (OM) was just one example.  OM was part of a nationwide movement that gained national stature in the fall of 2011 during a months long protest against corporate corruption and wealth inequality in the US.  OM shared the goals and mission of this movement, and evolved to take a more tangible direct-action response to the issue of homelessness in Madison through OM Village.

In the words of OMI, “Occupy Madison’s mission is to join [the housed and unhoused communities] together to creatively work towards a more humane and sustainable world…OMI envisions a place where people with or without current safe housing can live and/or work cooperatively in a way that promotes dignity, safety, stewardship, and sustainability for all. This project is a direct outcome of Occupy Madison encampments and the experience gained from those encampments with the elements that are needed to provide a safe and successful community with basic shelter” (found here, pg 3).

The Tiny Home Village model was already a tried and true method for providing transitional/affordable housing to homeless individuals, as was evident in such communities as Dignity Village, Quixote Village, etc., and OMI foresaw the benefits both socially and economically that this project could have if executed successfully.  So they began working towards OM Village in order to provide the physical and social infrastructure needed to alleviate homelessness in Madison.

The homes were designed prior to the village with the intention of appealing to the safety and aesthetic concerns of the larger community. The ‘village’ design was completed and rendered by architect, Ed Kuharski of Green Design Studio, but was a collaborative process with input from landscape consultants: Madison Permaculture Guild, Bob Klebba, Morningstar Farms, and Janet Parker; landscape architect, Richard Slayton; Occupy Madison board/community members; and the nearby East Emerson Neighborhood community. The implementation of the project includes three phases (See ‘construction schedule’) and the completion of each phase (and components within each phase) is dependent on the availability of funding and volunteer labor (i.e. financial and social capital). The tiny homes were built by volunteers and village residents as “sweat-equity”.

OMI purchased the land in 2012 for $110,000 and spent roughly $160,000 in renovations to bring the property’s existing facilities into compliance with zoning regulations, building codes, and ADA standards. Initial funds for the project mostly came via private financing from nonresident members of the non-profit’s board of directors (specifics can be found here, on pgs 34, 41). Additionally, OMV is entirely (as of this publication) volunteer and donation based and therefore yield no financial burden to the taxpayer. OMV is able to raise over $80,000 annually through a combination of fund raising events, general donations, internet/website based donations, OM Goods sales, major donors, raffles, and crowdfunding campaigns (See specific figures under “Funding” and “Budget”). While the project is still considerably dependent on donations to keep the monthly bills paid, the hope is that OM Goods, a micro-enterprise of the community that allows residents to use the on-site workshop to produce craft goods that are then either sold or gifted to donors, will eventually provide the financial income capable of handling most or all of the Village’s expenses/payments.

The “benefits” of a citizen-funded, donation/volunteer based system is that it allows the project to maintain a level of autonomy perhaps not available if funded/subsidized by government entities. It also allows for certain flexibility with sources of materials, which keeps costs incredibly low compared to a government project (See related case study on Quixote Village for contrast). The “costs” to a project like OMV are visible in the financial vulnerability. If donations stop coming in due to lack of interest or a number of other factors, the village would be at risk of losing its conditional use permits and/or the property itself.

When comparing a Tiny Home Village (especially one like OMV) to a typical “new” low-income or affordable housing development, the economic analysis is a no-brainer. Each tiny home costs roughly $5,000 and can house up to two individuals (if both willing). In comparison, the average cost of a new low-income housing structure hovers around $150,000-$200,000 per unit, not including land. While OMI is aware that the tiny home village model may not be the ultimate answer to the problem of homelessness, it is worthwhile to note that the ability for citizens to take a bottom-up (grassroots) approach to supplying immediate housing for homeless individuals at such a low cost and with such high social benefit for the surrounding community is a very empowering achievement indeed, and certainly a step in the right direction.