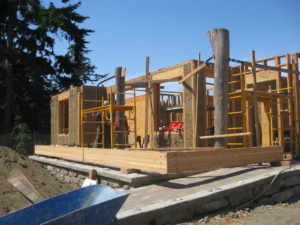 This permitted installation of straw/clay wall insulation had to meet Washington energy code and International Building Code standards. Existing code supplements from other states were referenced and applied by the building team and the approving building department. The straw/clay insulation filled a 12” thick split stud cavity in a single family structure at the Port Townsend Ecovillage. It appears that this was the first straw/clay house permitted in the State of Washington. The permit was issued in May of 2013

The owners of this private residence were committed to using a straw/clay wall system. They were attracted to this as a non-toxic, energy efficient and long lasting building solution that used local, site processed, raw materials. They also wanted to use a method that could be used and has been used for centuries, by and for local communities, without fossil fuel dependence.

Meeting most of the requirements of the building department was accomplished by following code supplements previously developed in other states and by having a structural engineers custom design.

The WA state energy code was met by using a component performance path. This requires providing total area u-value for all parts of the building envelope including the straw clay walls, and then comparing the the whole house to a baseline house meeting the energy code.  Default R-Values for straw/Clay was set at 1.6 per inch, previously established in New Mexico and Oregon Code supplements. Original data from a primary source was found in a study done by the Canadian Housing and Mortgage Corporation (CHMC). In reality Insulation values for straw/clay can vary depending on density (how it was packed and clay content)

The system is both envelope insulation and an air barrier that acts as permeable membrane. This monolithic permeable membrane manages moisture inside the home and throughout the wall assembly with out the vapor retarder that building codes in this climate require. Although the building department did not require proof of it for this project, there is building science research (& historical building forensics) that documents how walls like this can manage moisture by being vapor permeable.

The straw clay mixture was made on-site by combining loose (not baled) straw, local clay, and water. It was then lightly packed inside “slip forms” temporarily installed on the inner and outer face of the 12” walls. When the loose straw is combined with the liquid clay, it coats the straw in a protective mineral coating, which adds rot resistance pulling moisture from the fiber. After the walls dry, the straw/clay fill combines with the interior plaster and exteriorstucco to act as system.

Straw clay is a traditional vernacular building technique used in numerous ways in different parts of the world. It is most known historically as an“infill” for traditional German timber frame structures (many 500 year old + and still occupied).  The German name Leight Leihm translates to lightened earth or insulated earth. There has been A rebirth/resurgence of use in Europe and North America due to the proven longevity, thermal performance and ecological sensitivity. In the US there have been pioneers getting permits for homes using straw clay for the past 20 years in various states.  Robert LaPorte and Paula Baker-LaPorte of Econest Homes have been champions for Building Biology and healthy homes. They have lead the development of design/build and education processes for Straw Clay building in North America. New Mexico and Oregon Straw/Clay Code supplements were developed based on their work

One of the main goals for the project was to incorporate learning and community building opportunities. A 2 week long “learning lab” was organized for college aged student interns to learn framing carpentry and the straw/clay system. This culminated with a 3 day long work-party/workshop to mix the straw clay and fill the walls. “Singing with Straw/clay: a celebration of interdependence” was held over the 4th of July weekend, 2013. The turnout and experience brought singing and fun together with building, as people helped build the nest-like walls of a home by getting their hands in the mud.  These accessible and tactile materials encouraged a sense of empowerment, community and our place in the environment.  Such timeless, healthy ways of building are reminders of how people have and continue to build around the world.

Process for this home prioritized and integration of traditional materials and methods with modern energy efficiency details.  Building biology principles, passive solar design, wide overhangs and compact living spaces we very important. Being part of the Port Townsend Ecovillage and bound by its covenants also contributed to the size and numerous details of the home (e.g. no asphalt shingles or private laundry machine). Clustered housing situated the home very close to other homes around common acreage with a CSA farm. This along with the design of a 700 sq ft downstairs unit with a 450 sq ft apartment above creates a real opportunity for multi-generational living and community.

There were long drying times with the drying of the straw clay into the fall (even with heat). This was significantly sped up with the use of lots of air movement and the wall dried out enough to plaster: Lesson learned for straw clay in the maritime NW: Put fans on walls as soon as possible

Light straw clay will join straw bale in the IRC (International Residential Code) with code supplements included in the 2015 edition.