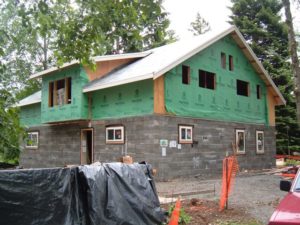 GRuB (Garden-Raised Bounty) was a project with a lot of community support. Local outreach and a history of service to the area were factors that led to this non-profit’s headquarters being located in a Single Family Residence neighborhood with a conditional use permit. Their facility includes a 5-Star Green Built farmhouse, which they use to stage their activities that provide fresh produce and garden beds for low to no-income households in the South Puget Sound area. GRuB Farmhouse was permitted to build a commercially designated building in a single family residence zone in Olympia, WA. This was accomplished by the acquisition of a conditional use permit through the City of Olympia.

GRuB Farmhouse was permitted to build a commercially designated building in a single family residence zone in Olympia, WA. This was accomplished by the acquisition of a conditional use permit through the City of Olympia.

Required a Conditional Use Permit through the City of Olympia.

The GRuB farmhouse is located at 2016 Elliott Avenue NW on the West side of Olympia, Washington. The parcel originally belonged to Bonnie Turner, who allowed the GRuB organization to utilize her land to start a youth gardening project. The land is located in a single family residence zoned area. After Bonnie Turner passed away, her family graciously sold the 2 acre parcel to GRuB. Co-founder Blue Peetz wrote to the city of Olympia announcing that GRuB intended to demolish the single family residence on the parcel and construct a new farmhouse. Initial concerns about the request included number of participants and hours of operation.

The construction of the GRuB farmhouse was not in accordance with its residential designation in that it was built to stage the activities of a non-profit organization, and for marketable farming. Commercial uses for the new farmhouse included program and office space used for their youth agricultural project and two four- foot signs. To operate the GRuB farmhouse, which would be categorized under a commercial designation, GRuB had to apply for a conditional use permit.

A conditional use permit allows for commercial uses within a residentially zoned district. It must be determined that the presence and operations of the building will not introduce harmful materials, or otherwise be disruptive to the lives of the citizens in the area. To obtain a conditional use permit, GRuB first had to complete a conditional use permit application with the City of Olympia which included a site plan, wetland report, level II tree plan, and project description. At minimum, the project needed to be in compliance with the City of Olympia Comprehensive Plan, Olympia Municipal Code, Development Guidelines and Public Works Standards, and the Drainage Design and Erosion Control Manual for Olympia.

Along with providing all of the required components, project planner Kraig Challam took special care to show the ways in which the new farmhouse both fit with the character of the neighborhood and would benefit its residents. The new structure was planned to be a size, height and architectural style that matches the character of the neighborhood. The farmhouse would not be directly adjacent to any adjoining properties, and the large trees surrounding the parcel were to be preserved. This green space helps to eliminate noise generation that would normally be a concern for a commercial operation in a residential neighborhood. Because the farmhouse is located within close proximity to a bus route vehicle traffic and parking was not a concern. Co-director Blue Peetz signed an agreement with Olympia Unitarian Universalist Congregation to use their parking lot for overflow parking during GRuB’s graduation event.

A notice of GRuB’s land use application was mailed to nearby neighborhood associations on September 6th, 2007. Comment cards were also distributed to members of the community. During a two week period, citizens could voice their opinions about how the change of zoning designation might affect the surrounding neighborhood and request for a public hearing. Comments from neighbors and the Burbank Neighborhood Association were overwhelmingly positive and showed strong support for the project. A public hearing was not requested. The GRuB farmhouse was issued a Conditional Use permit on December 17, 2007.

GRuB continues to be an asset to the community by providing outreach to local youth, donating fresh produce to the Thurston County Food Bank, and helping low-to-no income households set up raised-bed gardens through its Kitchen Garden Program.