Subsidized Housing in a Light Industrial Zone at Quixote Village! 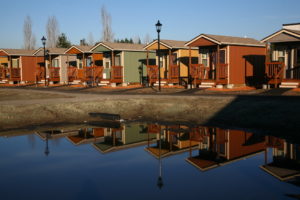 This case examines the partnership between the residents of Camp Quixote – a self-governing tent community of homeless adults – and Panza, their nonprofit support organization, Thurston County and the City of Olympia, to site a permanent supportive housing community in a light industrial zone. This required a comprehensive plan amendment and a zoning code amendment adopted by the Olympia City Council over the objections of neighboring commercial property owners, as well as a conditional use permit. On Christmas Eve, 2013 Quixote Village welcomed its previously homeless residents to their new homes, which include a 1700 sq. common house with shared facilities, and 30 individual “tiny house” 144 sq. ft. sleeping units.

Quixote Village began as a protest in a downtown Olympia parking lot in February, 2007.  When police threatened to break it up, the local Unitarian church offered it sanctuary on church grounds.  Within a few months, the City adopted an ordinance which added a new chapter, 18.50 – Homeless Encampments to the Olympia Zoning Code.  This new zone allowed a temporary homeless encampment to reside on property owned and managed by religious organizations for up to ninety days (later extended to 180 days). The residents’ larger goal of developing permanent stable housing was only realized later after a lengthy public process.  In response to Thurston County’s donation of the land, in 2012 the Olympia City Council passed a one-time amendment to the zoning code which authorized a single “permanent homeless encampment” on County land. Thus for any future “permanent housing encampments” to be constructed, additional code amendments would have to be enacted.

After meeting all applicable City engineering, building, and fire codes, the project was finally constructed under a conditional use permit for 30 individual Tiny Cottage units and a 1700 sq. ft. shared common house in a light industrial zone.

Quixote Village is a self-governing community of previously homeless adults who have been living together in a “homeless tent encampment” since coming together in 2007 to protest a new city ordinance that prohibited sidewalk and car camping.  With the help of their non-profit partner Panza and Garner Miller of MSGS Architects, Camp Quixote residents designed their village through an integrated, collaborative design process.  It now provides stable permanent housing and social service support for 30 chronically homeless people in Thurston County.  This unique residential development was allowed in a light-industrial zone through a code amendment rather than a site-specific rezone, so that the project could become a model of this type of innovative housing led by homeless people.

The amendment finally adopted in 2012 by the Olympia City Council was preceded by a lengthy public process which involved a) Thurston County offering up the 217-acre site for the project; b) a site specific development proposal from Panza and Camp Quixote residents;  c) staff development of the zoning amendment as an alternative path to compliance; which was then d) announced to the neighborhood and discussed at public meetings and hearings; e) recommended for approval by the Planning Commission; f) considered and adopted by the City Council; g) a vigorous appeal and campaign by neighboring property owners to kill the project; h) a Growth Hearings Board decision which resulted in a second round with the Planning Commission and City Council on a comprehensive Plan amendment; and finally g) another Hearings Board decision to allow the project under the amended Comprehensive Plan and zoning code.  With this amendment the City changed the definition in the code from “temporary” to “permanent homeless encampment” and “temporary use” to “conditional use” subject to a public process.  Although the definition asserts “encampment,” it is actually defined as permanent subsidized housing.

Each individual dwelling is equipped with a front porch, private 8×18 foot living space (144 square feet) and a personal toilet and sink – designed to meet the express personal needs of the residents.  Additional shared facilities are in the Community Center common house containing laundry faculties, showers, kitchen, dining, and other facilities.  To secure the Conditional Use Permit to build in the non-conforming zone, the project also needed to comply with all applicable City engineering, building, and fire codes.  It was determined that the single resident occupancy SRO units would be considered sleeping units rather than accessory dwelling units, similar to assisted living SROs because they each have individual toilets, but not kitchens. They were reviewed under 2009 International Residential Code – R-3 as residential occupancies.

Quixote Village grew out of a protest held February 2007 in downtown Olympia, in response to the City of Olympia passing an ordinance prohibiting sleeping on sidewalks. No longer allowed to camp on City streets, a coalition of homeless people and their allies worked with the City Council to adopt Emergency Ordinance 6480 on July 17, 2007, allowing their temporary encampment to continue.

From the beginning, Quixote Village was intended as more than a place to live, but as a place to build community. It’s a living model for creating homeless housing that meets the needs of a unique population, and to demonstrate affordability and environmental sustainability. Nevertheless, from the onset there has been significant push back from neighboring commercial property owners who fought to prevent Quixote Village from  being built.

One challenge, securing a site for Quixote Village, was overcome when Thurston County agreed to lease a 2.17-acre County-owned site to Panza for $1 a year for 41 years. Part unused parking lot and undeveloped land, the surplus County property was chosen because it was served by existing city utilities, had limited impacts on adjacent properties and would be buildable at a reasonable cost. It is also close to South Puget Sound Community College, nearby employers, and public transit. It was also chosen in part because the County is the only public entity with jurisdiction over the public health issues arising from a permanent homeless encampment, such as the sanitation and food preparation issues. The County also has practical expertise in this area.

Quixote Village is operated through the non-profit organization Panza, which has a Board of local religious and community leaders. Panza was formed to support the needs of the chronically homeless residents of Camp Quixote in 2007, hosting the movable community at 5 different churches and raising the $56,000 per year needed for operations and to provide social service support before raising the $3.05 million required to build the permanent village. The successful construction of Quixote Village has been financed by a state capital budget allocation of $1.5 million from the Housing Trust Fund, along with a federal Community Development Block Grant of $604,000 that came through Thurston County, and additional funding from the County’s Home Consortium, the City of Olympia, the Nisqually and Chehalis Indian Tribes, and many local individual donors.

Quixote Village has dramatically improved the standard of living of its 30 residents with the cultivation of an enriching, vibrant, and living community; cottage dwellings engendering privacy while simultaneously supporting a tangible community environment, e.g., showers, recreation/common areas with communal kitchen and garden. Therefore residents are free to socialize or engage in the common area, enhance job seeking skills, or simply enjoy the privacy of their unit. Residents also benefit from social service support that helps them gain access to health and mental health care, disability benefits, job training and education. Residents also learn social and civic skills by participating in the Village’s governance. The Resident Council meets weekly, following a communal dinner, and twice each year residents elect a five-member Executive Committee which collaborates with Panza and the Village Program Manager to ensure that rules are followed, chores get done, and new programs and initiatives are planned and carried out.

There are significant cost savings from housing chronically homeless individuals, who are more frequent visitors to emergency medical services and jail than any other population – a significant cost to society. According to the National Alliance to End Homelessness, the average savings to a municipality for providing a chronically homeless individual with permanent housing is $15,773 per year. Most importantly, Quixote Village is a sustainable legacy investment which disrupts the cycle of homelessness, incarceration, and mental decompensation; Quixote Village ultimately provides a stable and dignified living environment for people transitioning from homelessness into permanent housing. A ten year plan for Thurston County and the City of Olympia is calling for 150 new units of permanent supportive housing for the chronically homeless population. Recently, a 95 unit dwelling in Seattle was found to have saved $4,000,000 dollars in services from the first year alone. Quixote Village is a pilot project for Thurston County and the City of Olympia, one which will have a profound impact on addressing the homeless housing needs for years to come.