McGilvra “Living Park” at the Bullitt Center in Seattle 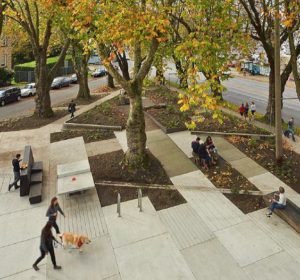 On a busy corner in Seattle’s Capitol Hill neighborhood, the developers of the Bullitt Center partnered with neighbors and the City to renovate a run-down public park into a vibrant public tree-lined plaza that quickly became a hub of urban activity. It’s right next to the world’s greenest office building, the Bullitt Center in Seattle, WA.

To create this unique public place, the Bullitt Foundation partnered with the neighbors, who then stepped up to approach the City Parks and Recreation with a proposal to the Parks Opportunity Fund to back the park renovation plan.  The City’s Comprehensive plan and the neighborhood subarea plan had already identified a localized need for more public space.

Before the park renovation could be permitted, they held a series of public meetings with residents, nearby business owners and the public to get input on the conceptual design.  They eventually went through 3 alternatives to arrive at a preferred final design. Funding was awarded and a permit was issued to Seattle Parks and Recreation by the Department of Transportation (SDOT). Public funds were leveraged with private donations, and the project was completed in April 2013.

The design team, in coordination with the Bullitt center developers, applied to close the 15th Ave to vehicle traffic to extend the public plaza; while the Bullitt team received permission to install a greywater / stormwater infiltration zone adjacent to the park (sidewalk right-of-way), thereby extending the public space and multiplying the benefits.  See separate case study Greywater Treatment and Infiltration at the Bullitt Center.

The project involved a unique public/private collaboration inspired the International Living Future Institute’s Living Building Challenge (LBC). The Bullitt Center, arguably the “world’s greenest office building” was being developed on the lot immediately adjacent to a small plot of land managed by City Parks. The tiny park was a mostly unused triangle of raised concrete and eleven 100-year old London Plane Trees (Platanus acerifolia) between the curbs & sidewalks, at the intersection of Madison and Pike streets in Seattle’s busy Capitol Hill neighborhood.  Even as the Bullitt Center sought the world’s toughest green building certification, the Park itself became the first park to be certified under the Living Building Challenge, for Infrastructure + Landscape Typology.  The LBC includes imperatives for site, water, energy, health, materials, equity.and beauty

An open space gap analysis in the neighborhood’s subarea plan had for some time identified a need for more public space in the area.  To enliven the neighborhood and add functional beauty to the building, the Bullitt developers worked with the City to create a pedestrian friendly amenity with native landscaping, benches made from reclaimed wood, and a concrete ping-pong table. 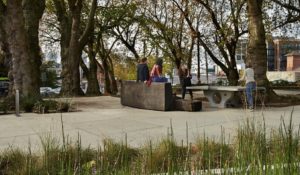 The Bullitt Center is a demonstration of the principles of restorative development, going beyond simply reducing the impacts of building materials, energy use etc. Restorative development actively enhances the site ecosystem where the project is located while improving the health of people who use the place. The park was an extension of this restorative principle beyond the building itself to enhance the surrounding neighborhood’s environmental, social and economic well-being.  Bullitt Foundation President Denis Hayes was quoted as saying the park was an “appropriate gift” to the community for the Bullitt Center to arrive as a good neighbor.

Immediately adjacent to the existing park’s eastern edge, the project team got permission to close 15th Ave right-of-way to traffic to create more public space as a part of the overall park design. Next to the closed street, the Bullitt Center installed a greywater / stormwater infiltration zone on the sidewalk right-of-way – a separate but coordinated project – in a seamless connection that makes the line between public and private invisible. The street was hardly used and no parking spaces were lost. 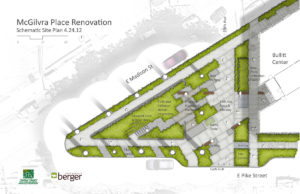 By coordinating the design and installation of both projects, the goal was to make line between the park and the pedestrian realm of the street ROW transition seamless and practically invisible. The iterative design process included three public meetings at which designers presented three alternatives, and requested input from residents, nearby business owners and other interested people.  Without the unique knowledge and collaboration of the Bullitt building’s developer, Joseph David of Point 32, developing the park as a certified “living” project would not have been possible.

In addition, because of the close collaboration with the building developer, for the first time in City history, Parks Department was able to leverage private development’s frontage improvements and coordinate timing with a major park renovation, reducing costs and minimizing disruption.

The project hard costs totaled $406,000 plus another $72,000 in soft costs shouldered by the partners.  They applied and received funding from the Seattle Parks and Green Spaces Levy Opportunity Fund in 2010. The Bullitt Foundation partnered with the Seattle Parks Foundation led an ambitious capital campaign effort to collect the remaining funds needed to complete the renovation.

Berger Partnership’s Jonathan Morley commented that “Though it’s on a number of busy roads, once you’re in there it really provides a unique urban respite.  In the urban realm, you don’t see an asset like that everywhere.  During the renovation we changed the grade, gave the trees more breathing room, opened it up to get new circulation and accessibility going throughout that space. The park renovation made that area bigger, more gracious, a better space for people and bikes.”