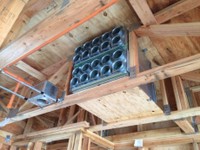 Green Hammer designed the homes in Ankeny Row to include whole-house, mechanical ventilation with balanced flow of air from the outdoors into the house and air exhausted from the house to the outdoors.  The ventilation system includes heat recovery (HRV).  The ventilation system exhausts air from areas with sources of contamination (including moisture): kitchen, bathrooms, and laundry.  Each kitchen includes an exhaust vent through which the HRV continuously pulls at least 25 to 35 cfm of stale air and exhausts it to the outdoors.  The HRV transfers approximately 90% of the heat from the exhaust air to the incoming cooler air to reduce the “ventilation energy penalty.” In addition, each kitchen includes a range hood which circulates air through filters to remove odors and prevent contamination of the ventilation system

Green Hammer calculated its proposed kitchen exhaust system provided a continuous exhaust rate of 25-35 cfm to exhaust in 24 hours nearly five times as much air as the entire house contains.  A code-equivalent exhaust system with not only a range hood, but also bathroom fans and clothes dryers exhausting air for one hour per day would result in only one house full of air exchanged in a 24 hour period. (see calculations in Related Documents)

The 2011 ORSC section R104.11 allows “Alternative materials, design and methods of construction and equipment” when such “material or work offered is, for the purpose intended, at last the equivalent of that prescribed in this code in quality, strength, effectiveness, fire resistance, durability, and safety.”   There was only one step in the appeal process: submitting the appeal (along with others needed for the project as designed) in writing  on the form supplied by the City of Portland along with the $227 fee.  The building official granted the appeal in an administrative hearing decided by City staff.  Applicants are not invited to attend unless their application is initially denied.

Green Hammer designed and constructed six attached single family residences in a community called Ankeny Row (on SE Ankeny Street).  Green Hammer worked with the homeowners for several months refining the design of the homes to meet the homeowners’ goal of net zero energy, low-environmental impact, durable homes built with sustainable materials.  Green Hammer supports all of these goals, and it carefully designed the homes to be a net zero energy energy annually (producing as much electricity onsite with rooftop solar PV as the homeowners consume in their homes each year).  In order to reach this goal, energy-efficiency guided every step of design and construction.  Thus, all of the homes approach or meet the Passive House Standard, the world’s most rigorous building operating energy efficiency standard that strictly limits air leakage, energy use for space heating and cooling, and whole-building annual operating energy.  A passive house must be airtight, (leakage < 0.6 ACH @ 50 Pa), so a hole in the house for direct-through-envelope, ducted, 150 cfm exhaust causes many problems, i.e. substatial heat loss from a duct and damper used only intermittently for short periods of time.  It would require a dedicated source of make-up air, likely requiring another large hole, damper, incidental leakage, etc.).  Conventional, through-wall or through-roof kitchen vents add costs, complexity, and potential maintenance, repair, and replacement obligations, while exhausting relatively warm air and introducing relatively cold make-up air into the home in winter.  The huge energy penalty makes it difficult to meet both net zero energy and passive house goals.  Recycling the heat produced from cooking with heat recovery ventilation helps reduce the space heating load. (cost benefit?)   By employing “passive” heating strategies such as recycling heat from air exhausted from the home by the ventilation system, a micro heater is sufficient for the tiny space heating load.  In fact, Green Hammer’s energy modeling shows that these six homes have an average peak heating load of 1,500 watts–the output of a small hairdryer; and a load easily met with the rooftop solar PV electricity generation.

There was no additional material or labor cost since Green Hammer had always planned to install all of the components of the heat recovery ventilation system.  Not only are the Ankeny Row first-costs (design and construction) lower than the code-required alternative, but Green Hammer expects the Ankeny Row houses will experience the tremendous operating energy savings that buildings meeting the Passive House Standard enjoy year after year.  These savings greatly exceed the incremental additional costs for premium building materials and superior quality construction required to meet the Standard.  In fact, with their rooftop solar PV arrays supplying all operating electricity, the Ankeny Row houses will have no operating energy bills.