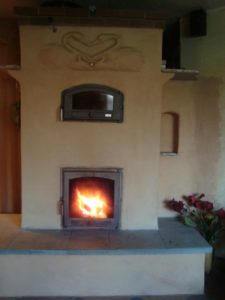 Replacing an old and poorly installed fireplace resulted in the construction of a handcrafted brick and plaster masonry heater. The owner/builder faced fire hazard concerns, structural hurdles, and indoor air quality standards but used hands-on experience and an extensive support network to see the project become the centerpiece of her household.

The non-standard, owner designed & built project was permitted through the City of Lacey, with a critical approval from the Wood Stove Coordinator in the Air quality program at the Dept of Ecology, Rod Tinnemore. Numbers had to be provided showing the heater’s smoke output would be within safe levels. Jeff Cook, from The City of Lacey inspected the project 4 separate times at critical points in the process. A structural engineer and a chemist at Mutual Materials were consulted regarding a variance on the 12” foundation. The project followed the ASTM E1602-03 guidelines in addition to the 2006 IRC Code Section R1002.

Masonry Heaters are typically wood-fired sources of radiant heat utilizing thermal mass. This project was initiated when a wood burning fireplace insert was found by the owner to be unsafe during a cleaning. The original stove was believed to be installed in the late nineteen seventies or early eighties. Upon researching a suitable replacement, including traditional cast iron wood burning fireplaces and pellet stoves, the owner found information favoring masonry heaters via some online conversations that eventually led to a the non-profit website of the Masonry Heaters Association. This website is a rich source of information as well as a great resource for connecting with heater builders and distributors of masonry heaters.

The deciding factors for choosing a masonry heater for this application were many. Primarily, the heater stores the heat produced by one or two very hot fires per day. Because the heat is stored and doesn’t directly exit the space via a flue, less wood is needed than a traditional cast iron stove, and the fire doesn’t need to be constantly attended in order for the space to be heated. In addition, because the fires burn so hot, they emit far less particulate and pollution into the air. The unit itself doesn’t become dangerously hot (except for the doors at time of firing) to the touch, and in fact, the surface temperature of around 100 F produces an even heat throughout the day. There are no other mechanical, electrical devices outside of the two manual dampers, so the heater can operate during a power outage. The bake oven in this model provides a means to cook shortly after a fire, and serves as a warming oven otherwise. An unintended advantage of the heater is that it has become a major focal point of the house, provides additional seating in the living room, and has also provided heat for a second bathroom. All these incredible benefits add up to an amazing argument for masonry heaters. In this case, however, the reduced amount of firewood needed, the quality of the heat, and the convenience of spending less time on maintaining the fire were the main reasons for choosing this source of heat over the others mentioned.

Masonry heaters can be custom built brick by brick, built from a kit that contains the larger pieces of the core with the owner providing the veneer, or whole, complete manufactured units. The latter can cost anywhere from about $14,000 and up (to $40,000). Kits cost around half that, but they are not complete, and a custom built by a heater builder will also cost from around $14,000 and up depending on add-ons like a bake oven and a bench. An experienced heater builder can build a heater in two to three weeks. The owner of this project spent 2 years researching the construction of heaters, and attended annual workshops to learn this trade. In addition, she shadowed a master heater builder on 3 separate projects before starting the case study, and attended masonry apprenticeship training classes in Mountlake Terrace. The heater was built to operation in a period of 9 months, and the veneer was finished the following year.

Materials cost approximately $5200, while education cost $3500. The heater uses about 1-2 cords of wood per year at costs of around $200-$400. It is the primary heat source for about 800sf of the house, and has reduced the electric bill by half during the heating season.

Jerry Frisch, a resident of Everett, WA, and a masonry heater builder for 30 years lent his skill and knowledge, acting as the owner’s mentor. The owner, who has a BA in Design, drew up the plans based on one of the projects the owner shadowed Jerry on. His project was based on a tested WA approved model lined developed by Tulikivi. The particular design of this heater is a Finnish Contraflow, where the flue gases go up from the firebox, and then turn 180 degrees and flow down, then horizontal and out the vertical exhaust. This design was chosen because of the smaller footprint and simpler construction as compared to other styles. The heater is completely built of firebrick and faced with earthen plaster.

Since the heater has been completed, it has been inspected and cleaned once a year by the owner. A 48” section of flue was added to the chimney to draw better, and one of the 6 clean-outs were closed in. There has been some touch up to the plaster, which has been easy due to the nature of the plaster. Air intake to the heater was increased, and some of the firebox joints were touched up. The alternate path of the flue through the bake oven was temporarily blocked to keep the ash and smoke off the food. The heater uses only a cord and a half of wood per season, much less than a traditional wood-burning unit used for heating. The owner considers this project a success, and hopes this information will be useful to anyone embarking on a similar project, or will aid in making certain determinations regarding a decision concerning masonry heaters.