Human Waste Treatment and Water Reuse at Hassalo on Eighth 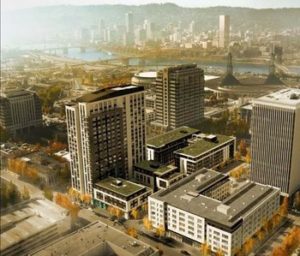 American Assets Trust developed this mixed-use three-building project that spans four blocks as part of Portland’s Lloyd EcoDistrict. The three buildings share one of the largest natural organic recycling treatment systems in the US, which treats all the buildings’ wastewater (including human waste from toilets) for reuse for toilet flushing, mechanical cooling and below surface landscape irrigation in an urban setting.  It was permitted as a Water Pollution Control Facility with two on-site injection dry wells. The project showcases the economic and ecological benefits of district scale onsite wastewater treatment and reuse.

To treat all three buildings wastewater on-site, Hassalo on 8th relies on a high-tech, low energy system developed by BioHabitats, an environmental engineering firm focusing on regenerative design.  Their design is called the Natural Organic Recycling Machine, and affectionately nicknamed “NORM.” NORM is a permitted as a Water Pollution Control Facility (WPCF), regulated by the Oregon Department of Environmental Quality (DEQ).  Before water can be injected into dry wells that will eventually filter through layers of earth into groundwater, it must be treated to Class A water quality standards as specified in ORS 468B.195 and OAR 340-044 which also govern the construction, operation, permitting, and closure of injection devices.

The owner and developer, American Assets Trust, has contracted Puttman Infrastructure to manage the monitoring and maintenance required for the WPCF permit. The buildings are required to be connected to the Portland sewer system to provide a backup in case there is a need for overflow capacity or potential problem with the system. The water is treated to Class A reuse standards so that it can be used for toilet flushing, cooling mechanical systems and irrigating the landscape.

This cluster of high-rise mixed-use buildings near downtown Portland relies on an onsite wastewater treatment facility to treat and reuse all the wastewater onsite. A Natural Organic Recycling Machine (nicknamed NORM) treats the building’s wastewater allowing the water to be reused for flushing toilets, cooling mechanical systems and landscape irrigation. Reuse of the treated wastewater is allowed and permitted under Statewide Alternative Plumbing Method: OPSC 08-04. Excess water that is not used by the building and landscape is filtered into the ground through drywells. The solids that settle in the primary treatment tank are pumped out quarterly to the Durham Wastewater Treatment Facility run by Clean Water Services, to be used as fertilizer and fuel.

The Portland Bureau of Environmental Services (BES) reviewed the project’s impact on the City’s combined sewer system. They concentrated on calculating the emergency overflow quantity that would be necessary for maintenance or emergency bypass. BES reviewed and approved the volume of sewage that would potentially come to the city system under non-standard conditions.

Note that the NORM system does not treat stormwater. Stormwater swales on site treat and reduce storm flows before discharging to the combined sewer system. The project team considered treating all stormwater onsite but estimated that it would take at least 200 dry wells to safely handle it all.  Instead, stormwater is managed through a series of vegetated open-air constructed wetlands (basically large cisterns filled with different mediums like gravel or woodchips) along a pedestrian corridor. The pedestrian pathway is suspended above the wetlands creating a surprising beach boardwalk like feel in the middle of the urban landscape. While the project treats the buildings wastewater onsite it is not able to reuse its stormwater onsite, which is a pressing issue in Portland where sewers combine stormwater and sewage.

There are several other environmentally beneficial features to this project not covered in this case study, including rainwater capture and reuse for reflective ponds along the pedestrian corridor, green roofs and natural daylighting.

NORM reuses all the buildings wastewater on site, estimated at 60,000 gallons per day through a high-tech system that cleans the water so well it can be used inside the building. The water is treated to Class A reuse standards by trickling filters and constructed wetlands using gravity instead of pumps as much as possible.  Excess water that cannot be reused within the site is conveyed below the site for groundwater recharge by injecting it into dry wells. The wells are located below a basement level structure housing the biological treatment system. The goal with this innovative water reuse approach was to reduce the burden on the city’s wastewater treatment plant, create an aesthetically pleasing landscape, and create a positive environmental impact on the neighborhood in line with their commitment to becoming an EcoDistrict.

Stormwater, which is not treated by NORM, is treated separately from the buildings wastewater in a series of constructed wetlands that discharge to the combined sewer. One of the early goals of the project was to make NE Water Street a pedestrian corridor that would publicly showcase its role as a reservoir for the plant basins to process, filter and store water. However, a rainwater harvesting (RWH) system was requested by the city of Portland’s Bureau of Environmental Services instead, as a more beneficial system to the City and ratepayers, one that could more effectively manage stormwater, which is the greatest burden to the city’s combined sewer system.  Currently the site can hold 100% of it’s stormwater on site in concrete cisterns before discharging to the sewer. The reservoirs can even manage the 25 year storm for flow control before discharging to the combined sewer.  The stormwater system is designed in accordance with Portland’s Stormwater Management Manual. A rainwater harvesting system on the other hand could have been designed to infiltrate stormwater into the ground on site, thus reducing the load on the sewer system.

The NORM system is similar to a Living Machine, made famous by John Todd, designed to use biological processes and gravity to clean water with as little energy as possible. First wastewater is collected in tanks, which have an emergency overflow to the sewer. Then wastewater is pumped to the anoxic reactor which provides an oxygen free setting to help reduce the nutrient content of the wastewater. The trickling filters pump the wastewater over an organic medium that shelters microbes which devour nutrients in the wastewater. The exciting thing about the trickling filters is that it allows for a high level of treatment in a narrow and tall silo, where as a conventional wastewater treatment plant would have similar activity going on in a large horizontal pond.

After that, the water goes to the tidal wetland, a woodchip wetland, denitrification reactor and finally a polishing tidal wetland to create conditions of flood and drain like in a tidal system which fosters naturally occurring microbial organisms that eat more of the nutrients. The wetlands are underneath and beside the pedestrian corridor on NE Water street, however the wastewater is located below layers of gravel or woodchips, so that the public is not exposed. At the very end of this process mechanical filters screen out fine particles. Ultraviolet and ozone systems kill any pathogens that might be present and makes the water safe for reuse. Clean water is stored and distributed for reuse in the three buildings that make up Hassalo on Eighth.

Hassalo on Eighth is located in the Lloyd EcoDistrict. Ecodistricts aspire to create ecologically sustainable, beautiful and efficient urban developments at the district scale. The Lloyd EcoDistrict was formed in 2009 out of initiatives from the City of Portland and the Portland Sustainability Institute.  The area was selected as one of five Portland EcoDistrict Pilot projects in 2011 including Gateway, PSU, South Waterfront and Lents, when businesses and government leaders came together to develop the area’s EcoDistrict Roadmap. The stakeholder engagement process identified energy and transportation as major concerns for the Lloyd district community.

The Hassalo on Eighth team was motivated to explore alternatives like onsite wastewater treatment and reuse because of their commitment to being an EcoDistrict and the high initial estimates for the cost of system development charges. The system development charge (SDC) for sanitary sewer capacity was reduced because after installing the blackwater treatment system the project did not require the assumed sewer capacity based on the use. The City of Portland negotiated an adjustment to the SDC to reflect the system’s reduced reliance on the city combined sewer system. Please note, however, that while the project as designed has a reduced discharge, the City is still required to size pipes to reflect the project’s need for standby capacity. And the City’s SDCs are based on the money already spent to build those pipes. The capacity may go unused, but the City is still required to provide this standby capacity in support of the project’s emergency connection to the City sewer. An SDC reduction for one property results in those unpaid SDC costs being distributed to the ratepayers of the City of Portland. The Bureau of Environmental Services in Portland announced their decision in October 2015:

“The supplemental budget includes appropriation to refund up to $1.5 million (61%) of SDCs paid by the developer of the Hassalo on Eighth for completion of their “living system” on-site treatment facility. The SDCs were originally paid in May 2014. CBO notes that there is currently no established policy on SDC refunds for on-site treatment; the refund calculation is based on the discharge limit on the project. The proposed agreement contains a claw back provision in the event of any system failure or sustained excess discharges. CBO recommends that, should this facility prove successful and/or other developers seek to include similar features, the bureau work to develop a consistent policy to address this type of development going forward to ensure an equitable distribution of the costs of existing and future public infrastructure.” (Bureau of Environmental Services CBO Discussion and Recommendations 2015)