Tacoma Building, Fire and Historic Preservation officials worked with local architect Ben Ferguson to adopt an innovative Live/Work Work/Live code amendment in 2012.  Tacoma has a lot of historic buildings with an uncertain future, but the LWWL code makes it easier to adapt existing buildings for modern urban life.  By reducing regulatory and financial barriers by not requiring change of use, they have provided a clear path to approval for a new mixed-use building type that caters to today’s market.

Ferguson was concerned for the fate of many historic unreinforced masonry (URM) buildings in Tacoma, so he helped spearhead the Work/Live code amendment to facilitate redevelopment of existing commercial buildings into their highest and best use. This followed decades of momentum with “Live/Work” codes which gained popularity in the 1960s as a response to the de-industrialization of America’s inner cities. Live-work allows residents to operate small businesses as a secondary use of their unit; Work/Live code is the inverse of Live/Work: it allows a commercial building to contain a residential unit, so people can live where they work, i.e. the business use is primary with residence a secondary use.  Otherwise known as “Zero-Commute Housing” work-live and live-work eliminate the need to travel to work, provide affordable housing and commercial space, and encourage small business.

In the late 1990s, the City of Oakland, CA adopted the first Live/Work building code in conformance with the Uniform Building Code. The International Building Code Section 419, first adopted in 2009 allows Live-Work uses in R-2 occupancies but has no provision for residential accessory uses in commercial buildings, thus limiting the potential redevelopment of many well-suited structures. In Tacoma, Ferguson drew from the Oakland experience, tapping the knowledge of Architect Thomas Dolan whose practice in that City is focused on Live/Work, to help develop Tacoma’s first live/work and work/live code amendments in 2012. The stated purpose of the code was to promote community goals of sustainability, affordable housing and economic development, with a particular emphasis on the adaptive reuse of existing buildings in Downtown Tacoma and the City’s other Mixed-Use Centers.

Only one project to date has utilized the Tacoma Work-Live ordinance, currently in construction as of March 2017:  The Mckinley Station Lofts are converting an existing building previously occupied by the Tacoma Police Dept into 14 loft style work/live and live/work residential units. The west half the building is being constructed as residential (live/work) and the east half is being constructed as commercial (work/live).  This distinction was vital to the success of the project, since residential uses are prohibited at street level on McKinley Ave, a designated core pedestrian street per our land use codes (See related project case study – forthcoming).  No other projects have been completed to-date.

Multiple additional property owners are exploring the viability of work-live for their investment properties.  Ferguson Architecture has actively been working with one owner for a renovation to activate vacant street level retail for their downtown Tacoma multi-floor apartment building.

Other cities have implemented Work-Live ordinances but have approached the code regulations differently.  There was a major fire in a Work-Live project in Oakland on December 6, 2016.  Thirty-six people lost their lives and the Oakland government is investigating code modifications.  The Tacoma version of Work-Live would not allow similar uses that led to the fire.

Prior to their adoption in 2012, there were no specific land use code provisions for live/work and work/live development in Tacoma. The amendments provided a basic framework for where and how these uses would be allowed. The City then hired BLRB Architects in 2013 to conduct a consultant study on code compatibility with the existing provisions in the City’s Building Code. The study documents code precedents from other jurisdictions as well as three existing building case studies in Downtown Tacoma. It offered specific recommendations to address Building and Fire Code roadblocks to the renovation and reuse of existing buildings, and identified existing provisions within the Land Use Regulatory Code that should be reevaluated.

Then in 2015, City staff proposed revisions to the Land Use Regulatory Code as incremental improvements to the original amendments adopted in September 2012.  The Planning Commission held a public hearing on July 15, 2015, followed by a City Council Public Hearing on September 29.  The City Council adopted the proposed code amendments pertaining to live/work and work/live uses on November 3, 2015.  Posted below are the Council ordinance adopting the regulations and a tip sheet for interested parties and prospective permit applicants.

Work-Live is defined as a commercial space with an unseparated residential accessory use.  A work-live unit is the inverse of a live-work unit (an unseparated commercial use in a residential space) but the two types of units share nearly identical design principles.  The goal of both codes is to enable small businesses to share residential space and to minimize commuting and financial barriers for tenants.  In Tacoma, Work-Live is allowed in assembly (A), office/café/business (B), retail (M), and light manufacturing (F) occupancy classifications that are smaller than 3000 square feet..

The Work-Live ordinance is intended to lower regulatory and financial barriers for redevelopment.  Tacoma has a large stock of heritage properties with permitted uses that are obsolete for their intended uses.  Examples include small footprint downtown warehouses and narrow plan office buildings.  These building typologies are ideal for residential uses but the cost of changing their use to residential is cost-prohibitive within current market rents.  Work-Live allows a residential use in a commercial use building without changing the original occupancy classification.

Work-Live use is also ideal for small retail buildings in mixed-use centers where the back half of a building can be converted into an apartment with the street frontage remaining a retail or commercial use.  Another ideal W-L building type is retail spaces with chronic vacancy.  Work-Live allows short to mid-term use of a street level tenant space that can easily be converted back to retail when consumer demand is higher.  Work-Live enables a property owner to realize short-term revenue without eliminating the potential of future retail.

Work-Live is an allowable use within the City of Tacoma with no additional approvals required.  The city created a predictable approval process that does not rely upon staff discretion.  Work-Live improvements must include all required life-safety aspects of both the original commercial use and R-2 residential.  Building permit application must identify the business space with a distinct and definable separation from the living space, which does not need to be a firewall separation (subject to requirements – see below).

Existing buildings converting to live/work or work/live uses may be able to take advantage of some exemptions in the zoning and building codes. For buildings lawfully in existence prior to December 5, 1989:

For historic buildings, up to 10% of new floor area may be added in which external additions and alterations are exempt from all prescriptive design standards contained within TMC 13.06.500 and TMC 13.06A.

Offsite improvement requirements may be waived for live/work buildings with less than 10 units, or work/live buildings less than 30,000 square feet in area.

The intent of Tacoma’s Work-Live ordinance is to minimize regulatory barriers to adaptive reuse of underutilized buildings without compromising the safety and welfare of the public and emergency responders.  Tacoma has a large stock of poorly performing buildings. Tacoma initiated discussions with property owners to identify the reasons their properties were underperforming and why they had not further developed their properties to overcome the issues.  The two most common responses were low lease rates and the high cost of changing the existing undervalued use to a higher demand residential.

It is too early to determine if the Work-Live ordinance will eliminate barriers to adaptive reuse.  Multiple projects are in development as of March 2017.

Commercial buildings have a lower level of emergency response than a residential building.  Fire personnel are required to sweep residential buildings for occupants during a fire event.  Once a residential use is possible within a building the responders must verify the building is empty.  Fire Department personnel were primarily concerned with providing sprinkler systems to any building that contained residential use.  The committee agreed to a graduated and phased approach to sprinklers to minimize first cost without placing occupants and emergency personnel at risk.  Type 13-R and 13-D systems were approved for projects with four or less units that have separated commercial and residential areas.  Full Type 13 systems are required for unseparated uses and projects with greater than four units.  Unsprinklered buildings that would be partially occupied with W-L units would be required to fully sprinkler the units without immediately providing sprinklers for the remaining non-Work-Live spaces.  Future substantial improvements for non-Work-Live units are required to be upgraded on a space by space basis.

The Work-Live ordinance is likely to remain an indefinite part of the Tacoma amendments to the IBC.  No additional processes are required for the code to be maintained.  The two most likely reasons the code would be eliminated are if a flaw is identified that causes unintended life-safety danger with the Tacoma code or if there are further life-safety issues on a national scale with the Work-Live movement.  The Ghost Ship fire in Oakland has fire officials concerned and they are watching the investigation closely.

Tacoma’s Work-Live ordinance was designed as a Tacoma amendment to the International Building Code (IBC).  By working within the IBC the City is able to use conventional plan review processes which eliminates costs of additional oversight.  No additional fees are required by permit applicants. No incentives are proposed or necessary for this policy, the policy is a lower-cost method of development. 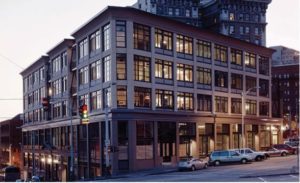