In 2015, Pennsylvania became the US first state to give buildings designed to the Passive House standard a scoring advantage, in the annual competitive award program to win low-income housing federal tax credits. In 2015-16, the Pennsylvania Housing Finance Agency (PHFA) awarded the credit to 18 “certifiable” projects totalling 922 housing units, making the state home to the largest concentration of Passive House dwellings in the US.

Passive House was promoted by PHFA for all projects applying for the 9% Low Income Housing Tax Credit (LIHTC) funding available for construction of affordable housing projects. The LIHTC application is an extremely competitive, point-based system that allocates millions of dollars of federal funding for the design and construction of affordable housing in the state. The application process is in high demand, and only 25% of all applications are funded each year in Pennsylvania.

Although the partnership is in its early stages, it has been collaborative and mutually beneficial for all. PHFA adopted the Passive House standard as its new tool of choice to advance energy efficiency goals, and promoted it to affordable housing developers.  Their efforts paid off with a high number of Passive House project applications submitted during the 2015 funding cycle:

922 new affordable residential units will make Pennsylvania the state with the highest concentration of Passive House homes in in the US.  This partnership has become a nationwide model and with 12 states “committed” and 19 other states engaged and moving forward to adopt a similar model.

In spring 2014, a coalition of approximately 25 stakeholders—with leadership from Timothy (Tim) McDonald (president of Onion Flats and professor at Temple University)—met in Harrisburg, PA to propose to PHFA the design and development of a ZNE capable affordable housing community built to Passive House standards. McDonald worked with Passive House architects, designers and builders, members of the Housing Authority, and Mayors’ offices of Philadelphia and Pittsburgh, as well as representatives of affordable housing developers and sustainability advocates, to develop the proposal and present it to the PHFA.

The PHFA was already looking to “raise the bar” with respect to energy efficiency as developers had been surpassing their standards for years. PHFA welcomed the challenge and within 4 months put the project in motion by introducing language into their 2015 Qualified Allocation Plan (QAP), which incentivizes developers interested in 9% LIHTC funding to design/construct their projects to meet the rigorous Passive House Standard.

Applies to all projects in Pennsylvania applying for the 9% Low Income Housing Tax Credit (LIHTC) funding available for construction of affordable housing projects.

To do this, they created a new category, worth 10 points (out of its 120-point QAP) for “Passive House Certification.” The LIHTC application is a point-based system and extremely competitive. To qualify for the points, the projects were required to demonstrate through third-party verifications that the project was Passive House “certifiable.”   PHFA funds only 25% of all project applications each year (based primarily on highest point scores)

Passive House is implemented by two organizations: Passive House Institute US (PHIUS) and the Germany-based Passive House Institute (PHI); building owners and developers can get their project certified by either organization. Passive House prioritizes highly efficient building envelopes, advocating that homeowners can easily retrofit mechanical systems and appliances as new technology becomes available, whereas they cannot easily replace the building envelope. Buildings must also meet minimum use requirements by end use and air-tightness criteria. These criteria apply for all climate zones worldwide.

Passive House implementation in the US is rapidly gaining momentum as shown here in Figure 5, and PHI has collaborated with many local governments for the promotion of the program. Examples include the City of Eugene, OR, City of Seattle, WA, and with its partnership with the PHFA being the most significant partnership so far.

There were some barriers and challenges, which Tim McDonald and his coalition of stakeholders had to overcome during this partnership development effort. These included:

There are some market barriers to be overcome during implementation of the Passive House buildings, such as the air-tightness required in the envelope ( <0.5 ACH/hr) and the installation of triple pane windows that were typically imported from Europe. However, as the Passive House adoption rates continue to increase in the US, the market will respond accordingly with innovative solutions such as the Structural Insulated Panels (SIP) wall assemblies by Built Smart  that provide wall assemblies with fenestrations prefabricated to Passive House requirements.

The successful establishment of this partnership demonstrates the need for a strong champion for the facilitation of these kinds of partnerships (Tim McDonald, in this case). This case study also demonstrates that knowledge, education, or information barriers can be overcome with adequate communication and training. This partnership highlights the fact that Passive House has been able to penetrate the affordable market faster than the market rate residential market largely due to the provision of financial incentives available through the various state housing finance agencies. The private residential market may also benefit with similar incentive structures or legislative mandates in favor of Passive House implementation. Local governments may also consider providing incentives for the promotion of Passive House ready products such as the Built Green SIP products as ways to stimulate the market.

This partnership development effort has established a strong stakeholder group and large pipeline of Passive House projects in Pennsylvania. Tim McDonald is personally committed on expanding the Passive House adoption in other states with the LIHTC financing mechanisms or other means. The growth of the number of Passive House buildings and project shown in 4 demonstrates that this program is poised for momentous adoption in other parts of the country. 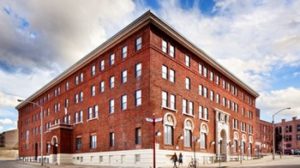