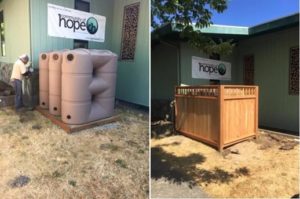 Seattle’s Rainwise program found that large buildings capture and treat stormwater more efficiently than single family homes. The city’s innovative rebate program awarded 100% of the cost for a cistern and irrigation system at a South Seattle church, covering both design and installation, to capture 142,000 gallons of stormwater per year and effectively reduce the force of peak storm flows.

Community of Hope Church of the Nazarene qualified for the rebate program because it was within an approved watershed within the city of Seattle. Many of Seattle’s combined sewage/stormwater systems have a history of overflows into Puget Sound, and Seattle has focused its efforts on these priority areas. After qualification, an assessment on treatment capacity determined a 100% rebate potential. Community of Hope’s roof measured 8340 square feet. Initial construction planning sited a rain garden around the front of the church in a narrow planting strip and cisterns for downspouts on other sides of the building. The cisterns provide peak flow attenuation during winter months, draining slowly into the combined sewer/stormwater system. In the dry season, the cisterns provide irrigation storage capacity for landscaping. Builder David Hymel, Rain Dog Designs, recalls earning the voluntary participation from Community of Hope Church:

Rain Dog Designs initially contacted the church pastor in October 2014, proposing a RainWise project with a series of cisterns in the rear and two rain gardens in the front, facing a busy street.  Tank placement and low maintenance plant choices that would improve the church’s appearance were primary planning considerations.  The two cistern systems included continuous horizontal piping to connect multiple downspouts, and directing overflow to existing side sewer connections.

This design met Rainwise rebate program requirements and was allowed to move forward.

The City of Seattle has an ambitious goal to capture and treat 700 million gallons of stormwater per year to offset combined stormwater/sewer overflows and recharge groundwater tables throughout the urban area, an increasing priority in Washington as scientists discover the detrimental effects of stormwater on aquatic species . The EPA recommends slow it down, spread it out, soak it in as a prescriptive method of retaining moisture, preventing flooding, and treating stormwater before it enters larger bodies of water. Seattle has initiated a certification program for contractors to understand the Rainwise building standards and install rain gardens that will be successful. An ongoing innovation, rain garden design has evolved over the last decade, with some public utility projects gaining negative attention and requiring costly renovations to improve drainage and aesthetics. By and large, the program’s evolution has allowed for improvements in low irrigation landscaping at an affordable price to homeowners and others akin to Hope Community Church.

For this particular project, Hymel estimated 142,000 gallons of rainfall capture per year, released into the combined stormwater system via the cistern storage of nearly four thousand gallons. This project allowed King County to reach their rainwise goal for the year, and was the beginning of Hymel’s campaign contacting churches for this service. In the months since, Rainwise has focused its outreach to these larger buildings such as churches and community centers, which can update landscaping and demonstrate environmental commitments with members and the community at minimal (if any) net cost.

RainWise is a coordinated effort by the City of Seattle and King County as a response to a federal consent decree requiring both jurisdictions to eliminate combined sewer overflows into the local marine environment by 2030. The RainWise goal is to increase the capacity of storm/sewer pipes by installing rain gardens and cisterns that divert roof rainfall and reduce peak stormwater flows.

About 50,000 private properties across 18 Seattle neighborhoods are eligible, and most installations require no additional cost to the property owners after the rebate is dispersed.  Seattle has set an additional  goal of mitigating the pollution of 700 million gallons of stormwater by 2025 with rain gardens, green roofs, cisterns and pervious pavement.  RainWise has identified structures with a roof size of 5000sf or more as the best value for reaching treatment goals.  Large roof projects have a more visible impact and measurably reduce peak flows in combined sewer basins.

After initial planning and approval, Hymel discovered a complication with another client’s project, which showed problems infiltrating large amounts of water into the narrow planting strip adjacent to the building foundation causing flooding to the basement. He suggested the initial design should be modified to prevent a similar complication. While the location was technically sound according to design standards, Hymel noted engineering a slope away from the building foundation would have been better for minimizing the possibility of flooding in the basement.  The level landscaping encouraged him to modify the design to avoid this.

Hymel replaced the rain gardens with RainWise compliant cisterns that overflow away from the church into gravel dispersion trenches. Overflows will run across the front sidewalk to the street. Adding cisterns to the front required visual screening. The pastor approved changes.  Late phases of construction included installing the visual screen and painting downspouts to match siding, installing the rear tanks, running the horizontal pipes and making the final side sewer connections. The installation was formally commissioned a completed RainWise project and earned the rebate November 2015.

Not only did they qualify for 100% rebate for the installation, the church is now eligible for up to a 25% reduction on annual stormwater fees. As Seattle area stormwater fees are increasing at the rate of 10% per year, this project has a triple bottom line positive outcome for Community of Hope: reducing stormwater impact, creating irrigation storage, and providing long-term stormwater fee reduction.

Funding for the RainWise program comes from King County Wastewater Treatment Division and Seattle Public Utilities, who jointly manage the wastewater systems in the Seattle area. Impervious surface development causes concerning overflows for the community and environment. The Rainwise program is an effort to mitigate these peak flows to reduce raw sewage spilling into the Puget Sound and comply with the Clean Water Act NPDES.  This project earned a rebate of approximately $16,000.

The RainWise Pilot Access Loan now provides advance funding for projects which initially qualify for the rebate. This program can help participants finance the project with minimal out of pocket expense before the project is signed off and full rebate issued. Additionally, rebate amounts have recently (April 2017) increased for cisterns to up to $3.92 per square foot of roof surface and $4/sf for rain gardens.

A grant called the Green Infrastructure Rebate Advance Fund (GIRAF) is an option for homeowners and participants in this program to bridge upfront financial costs for approved projects.

Designer
The Community of Hope Church of the Nazarene