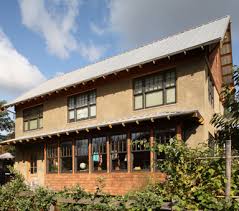 This home was one of the first in Oregon to permit rainwater for drinking. By pioneering a potable rainwater innovation, the owners and the design/build team helped spur Portland to become an early adopter of a city-wide rainwater harvesting code in 2004. The specialty designer on this project was landscape architect Pat Lando who himself has gone on to pioneer many advanced strategies for treating stormwater and recycling graywater and blackwater.

Before the City code was adopted in 2004, in 2001 Portland had developed a routine process for reviewing and approving rainwater harvesting systems for non-potable uses, but as an alternate form of plumbing it had to be approved through a code appeal.  The written appeal had to demonstrate how the proposed alternate complied with the intent of all applicable health, safety and sanitation codes. This had to be verified by an engineering analysis, full plan review and inspection in order to ensure the rainwater harvesting system is properly installed and operating.  In rare cases like this home, where they approved a rainwater harvesting system for potable use (drinking water), the owners also had to agree to have the water tested each year (more often at first), which they didn’t mind when they realized their water is cleaner than city water.

Once it was accepted, the City gave it the force of precedent, so that any subsequent project that used that same system components would be approved. These systems required first flush devices, approved storage tanks (cisterns), separated plumbing w/backflow preventers, water filtration and sanitation systems.  Not all the systems worked exactly as expected, but based on this and other early projects there have been several engineering improvements on systems like the first flush / sediment diverter that refined the technology for broader adoption.

According to landscape architect Pat Lando:

“The project lead the way to the creation and adoption of Portland’s rain water harvesting code. Portland’s rainwater code was first added by Ordinance No. 178578, effective September 1, 2004.

“That code was in many ways based on the research and development of the Bacon-Brenes house. The code was intended for residential buildings and didn’t address potable uses.  Though I used it many times in Portland and throughout the state.  Eventually the code was replaced with the adoption of the IAMPO plumbing code by the state of Oregon which has specific water re-use.

“The rainwater innovations in the BB house caused a series concentric innovations.  I started a “skid ready” system to ease the permitting and installation process.  And, as a green infrastructure consultant, we started down the path towards total water re-use and treatment on-site.  We are now able to see jurisdictional approvals for rainwater (potable, non-potable) use, and gray water reuse for inside and outside of buildings.  Previous to this project, the state didn’t allow rainwater re-use or have a definition for graywater!

“Today we are working with different groups going beyond net-zero water to net-zero nutrients.  Some are swapping out City System Development Fees for the natural organic recycling machine “NORM” a so-called “living machine” to treat human waste (blackwater).  We worked with Biohabitats on the Hassalo on 8th development, which has a black water to potable water system that was just commissioned at the end of 2015.   We are also working on a regional net-zero-food master plan, a urine-to-organic fertilizer system and a modular greenhouse that meets living building challenge.”

The Bacon-Brenes home is built on a previously developed site in the Sabin neighborhood of Portland; the original home was deconstructed and much of the material reused in the new home. The owners focused their building strategies around what was environmentally sustainable, using salvaged and recycled materials and implementing strategies for rainwater harvest. In addition to the two 1,700-gallon underground tanks, they gather rainwater for irrigate garden and native landscaping in oversized rain barrels.  Other green features energy efficient construction with Rastra blocks, solar hot water and radiant heating, wastewater heat recovery, and passive solar design.  The 22 foot long south-facing wall allows ample lighting for the main living area. The kitchen has concrete flooring which heats by the sun, and hand plaster walls for a warm feeling. The home has an energy recovery ventilation system that helps to maintain a high indoor air quality.  It is within walking distance of the lively NE Alberta Street area, known for its variety of art, music and food. Located in a dense area with great walkability, this allows for a car free life style and provides convenient public transportation and bicycle lanes

In the words of Owners Kristin & Matt Bacon-Brenes (quoted in City of Portland G-Rated Case Study):

“I started researching and planning to build a green home about a year before we started working with the architect. We got a lot of our initial information from home magazines and the Rebuilding Center. Andre, Dave, and our rainwater harvesting designer, Pat Lando, also had a lot of experience and great ideas.  The house was designed with Andre DeBar to be a small but flexible living space, based on many of the concepts from Sarah Susanka’s book, “The Not So Big House.”

“Our greatest success was our ability to communicate and work with our architect, Andre Debar and our contractor, Dave Heslam. Kristin spent quite a bit of time sketching the house design before we hired Andre as the architect. Andre was really open to Kristin’s ideas and all of our planning, and Dave was great too. Collectively, we had the flexibility and understanding to build the house to be what we envisioned together – a low-impact, high quality home that fits in with the neighborhood.”